Lawmaker pushes for Alabama to be constitutional carry state 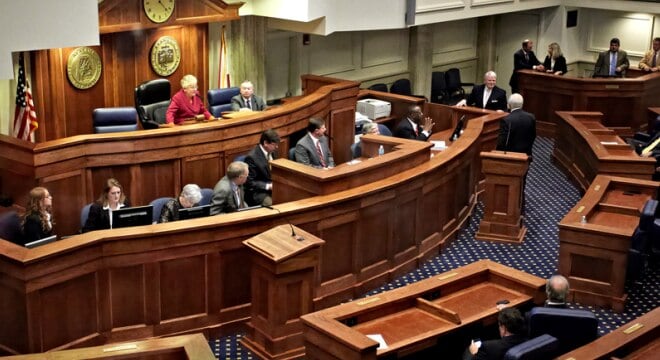 The Alabama Senate last year passed a bill 25-8 eliminating the requirement for a permit from a county sheriff to carry a concealed handgun, and another push is on this year. (Photo: AL Senate)

A state senator has filed legislation for the upcoming session to allow Alabamians to lawfully carry concealed handguns in the state without a permit.

State Sen. Gerald Allen, R-Tuscaloosa, this week filed Senate Bill 3 with the aim of repealing a number of state statutes governing the carry of handguns. As such, the measure will remove restrictions on Second Amendment rights and bring the state in line with others who codify constitutional, or permitless, carry as the law of the land.

Allen’s proposal would keep Alabama’s current concealed carry permitting scheme administered by county sheriffs in place, but erase the requirement to obtain such a permit. Permit holders would retain the advantage of being able to buy a gun without an additional background check as well as reciprocal carry in the states that currently recognize Alabama’s permits. Open carry is already legal without a permit. A similar version passed the Senate last year but never made it out of the House despite strong Republican control of that chamber.

Neighboring states, such as Mississippi, already have permitless carry laws. Alabama only moved away from a more restrictive “may issue” concealed carry system in 2013 and since then the state’s sheriffs have fought repeatedly to stop carry expansions without a permit. Last year, at least one sheriff went on record saying he opposed the move on grounds that his department would lose out on cash raked in from permit fees. Another pinned constitutional carry to the prospect of more armed people at hate rallies.

The National Rifle Association stands by the measure, saying it would “allow law-abiding adults in Alabama to carry in a manner that best suits their needs and improves their ability to defend themselves and their loved ones from danger.”

The legislation is currently assigned to the Senate Judiciary committee.