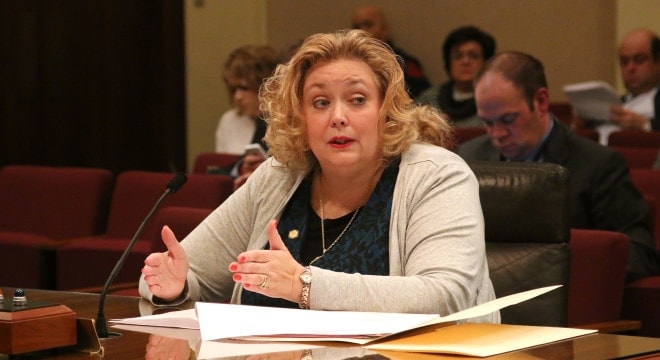 State Sen. Carol Blood said the proposed fee increase would be the first since they were introduced more than 25 years ago, but many lawmakers found it unpalatable. (Photo: Nebraska Legislature)

A move that would have upped the costs for those wanting a handgun in Nebraska was tabled by lawmakers this week.

The proposal, LB 81, would have increased the fee for a handgun certificate in the state five-fold, from $5 to $25. The backers of the move argued the fee has remained the same since it was introduced in 1991 while the volume of permits has quadrupled in the last decade alone. In the end, lawmakers in the Nebraska Senate voted 27-17 to sideline the measure.

“I have discussed with many people in my district and throughout the state of Nebraska who can barely afford a firearm; who can’t afford a concealed carry permit; and who just want to be able to defend themselves and their family. And for a lot of those people who I’ve spoken with, an additional $20 does mean something,” said state Sen. Mike Hilgers a Republican.

The bill was introduced by Sen. Carol Blood, a Lincoln area Democrat who argued the increase was needed to pay for the growing number of background checks resulting from the demand for the certificates that are required to lease, purchase, rent or otherwise transfer a handgun in the state. A fiscal impact study by legislative offices found that Douglas and Lancaster Counties, among the highest populated in the state, stood to see an annual increase in fee revenue of $120,000 moving forward if the bill passed.

“We are ripping off taxpayers when we choose to not rise to the responsibilities we have in the Legislature to make sure fees cover the expenses that we ask our counties to carry,” said Blood.