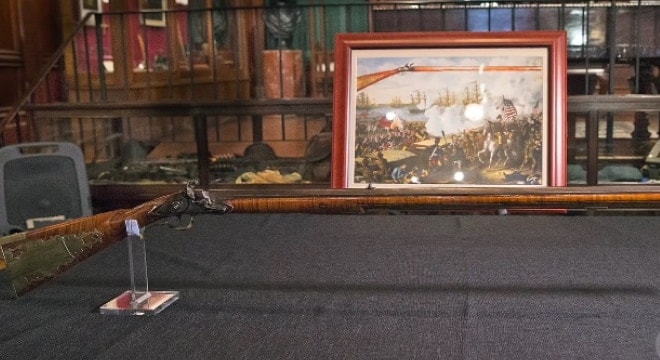 The long rifle, crafted by Virginia gunsmith John Scheetz around 1810, was used in the Battle of New Orleans and recently returned to a museum in the city after the FBI seized it from a collector who traded for it in 1982. (Photo: New Orleans Times-Picayune)

Though a local museum was happy to get their historic rifle back this week, the collector who safeguarded it and for half his life was heartbroken to find out it was stolen.

Back in 1982, New Orleans area collector Robert Melancon got a tip from a fellow enthusiast that an esteemed local antique shop had a beautiful gun up for grabs. The early 19th Century Kentucky long rifle, engraved with information about the former owner, became his after trading the shop $18,000 worth of other antique guns and Melancon and his wife Linda spent decades on the trail of discovering the rifle’s backstory.

Then, last November, the FBI came calling and raided the couple’s home, recovering the gun for the rightful owner and returning it in a very public ceremony this week.

“It’s heartbreaking,” Melancon, now 77, told the New Orleans Advocate. “It really is. We got that gun in good faith. And that rifle gained prominence because of what we did.”

The collector had obtained the piece from the famous James H. Cohen and Sons shop in the Crescent City’s French Quarter. A New Orleans institution since 1898, the shop is often referred to by gun guys as more a museum than a retailer and is even listed as an attraction on TripAdvisor.

Going past the reputation of the shop, Melancon dug through the National Archives, spoke with distant descendants of William Ross–the gun’s original owner– and publicized the historic piece, putting it on frequent public display. It was only last year that the museum, which had acquired the weapon from Ross’ grandson in the 1880s, sought to have it returned after reading an article featuring Melancon and the rifle, now valued at $650,000.

Though it’s gone now, leaving him with only a memory, the collector reportedly isn’t pining for its return.

“Don’t get me wrong. I’m upset, and my wife is appalled this is happening, too,” Melancon said. “But if it’s stolen, I don’t want anything to do with it.”