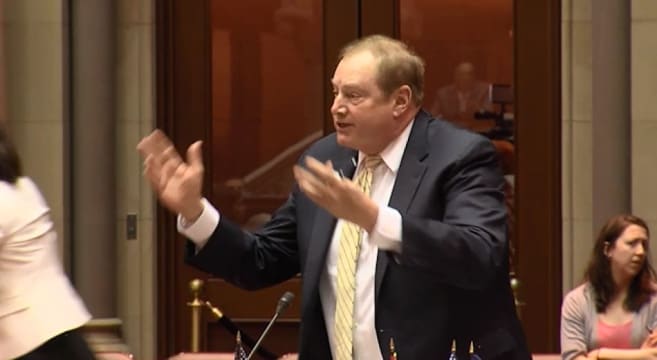 Assemblyman Marc Butler says there may be as many as a million pistol permit holders that have not recertified, and the deadline is looming. (Photo: NY Assembly)

Two New York Republicans want to pump the brakes on a problematic plan to recertify 1.25 million pistol permit holders and kick it down the road.

The permits, required to own a handgun in the state, are set to expire at the end of the month due to the New York Secure Ammunition and Firearms Enforcement Act, signed by Gov. Andrew Cuomo in 2013. The problem is that most facing the mandatory recertification haven’t done so, with Assemblyman Marc Butler advising only 204,000 have recertified as of last month.

“This bureaucratic quagmire concerning pistol recertification is a real threat which could turn many otherwise law-abiding citizens into criminals,” said Butler, stressing additional time is needed to sort the problem out. “The mess that is growing out of the pistol permit recertification requirement is one of the many concerns I had over the governor’s so-called SAFE Act.”

Legislation submitted by Butler this week in company with Assemblyman Brian Miller would set a new deadline of Jan. 31, 2019. Miller says the “rushed and reckless” implementation of the SAFE Act has now left potentially hundreds of thousands of handgun owners with lifetime permits in a lurch.

“It remains unclear how many permit holders have been notified of the need to recertify and how many have not,” Miller said. “That is unacceptable. Even worse, because of this flaw in the system, permit holders would be forced to surrender their handguns and possibly their long guns as well due to the nature of the ‘crime.’”

New York State Police has been posting reminders on social media in recent weeks and has been trying to establish a new database to handle the renewal program for several years with mixed results. In 2013, a pilot of the process was trialed in seven counties then was put on hold the next year without explanation. In 2015, three counties were enrolled in a smaller program in which 500 permit holders were contacted with an offer to voluntarily renew their license early in an effort to establish best practices and avoid a backlog.

Meanwhile, others, to include a number of count clerks who are seeking low compliance numbers, are asking Cuomo directly to otherwise push back the deadline. In addition to the drive to delay the recert requirement, a measure is in committee, A 5388, that would eliminate the mandate altogether.