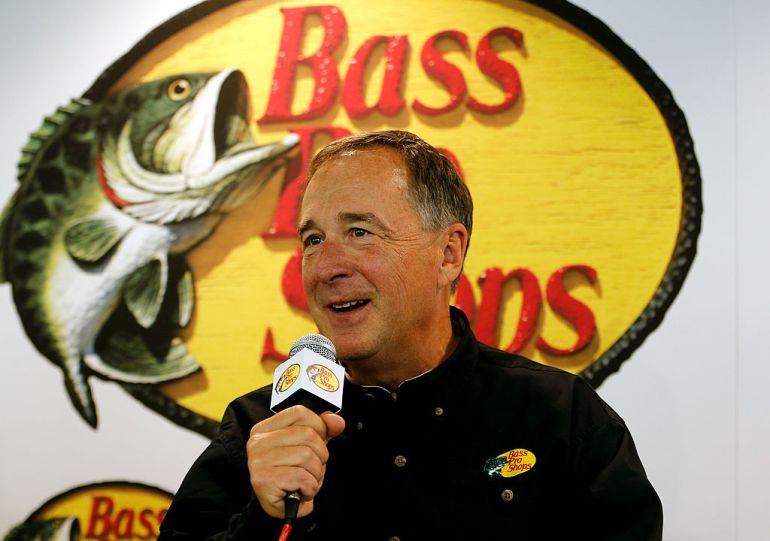 Bass Pro Shops founder and CEO Johnny Morris pledged up to $10 million of his own money to fund severance packages for ousted Cabela’s employees — but only if Cabela’s former executives contribute first. (Photo: Chris Graythen/Getty Images for Stewart-Haas Racing)

The founder of Bass Pro Shops wants former executives of its recently acquired competitor to share their “golden parachutes” with other staff members on the verge of unemployment.

Chief Executive Officer Johnny Morris challenged Cabela’s old leadership to fund a severance package for some of the 2,000 employees likely to lose their jobs at the retailer’s existing headquarters in Sidney, Nebraska. Cabela’s served as an economic anchor in the panhandle town of 6,700 residents until it merged with Bass Pro Shops in September.

Morris hasn’t divulged how many Cabela’s positions will be eliminated as both operations consolidate into Bass Pro Shops’ headquarters in Springfield, Missouri. He said he will match any severance package contributions up to $10 million, according to a report from the Omaha World-Herald.

Former CEO Tommy Millner, for example, took an $8 million payout when he relinquished control of the company after the $5 billion deal finalized last year.

“While I know the former owners and executives are under no obligation to lend this additional support, I hope they consider doing so,” Morris said.

So far, Cabela’s technology division and its four call centers — in Grand Island, Kearney, North Platte and Lincoln — will survive the merger, saving roughly 475 jobs. Morris also expressed a desire to keep “a significant accounting operation” in Sidney, as well as the local distribution center.

In a company memo obtained by the newspaper last month, Morris told employees Cabela’s “has been operating under the weight of an extremely heavy corporate payroll that is over two times greater than that of Bass Pro Shops to conduct relatively the same volume of business.”

“It is now time for a new approach and to turn around the strategies that did not work,” he said.