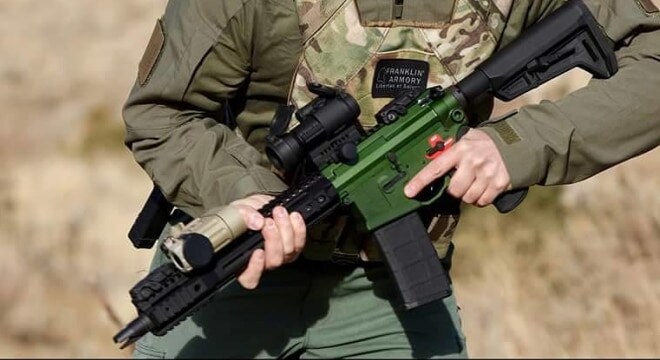 Nevada-based Franklin Armory said this week they are debuting their no-stamp-required Reformation firearm that includes both a Magpul stock and shorty barrel.

The Reformation is a non-rifle that, according to Franklin Armory President Jay Jacobson, has recently been approved by the Bureau of Alcohol Tobacco, Firearms and Explosives to be compliant with National Firearms Act regs.

“The patent-pending technology employed in Reformation will create a whole new market segment that will not require NFA approval,” Jacobsen said.

The AR-15 based firearm includes an 11.5-inch barrel with a muzzle device and a Magpul MOE SL carbine stock.

In the company’s press release they tout that the new gun is neither rifle or shotgun, a curious clarification which could point to an innovative barrel design that imparts stabilization without traditional rifling. The Reformation is touted as having “NRS technology” which may further allude to rifling, or lack thereof, which would put the gun out of bounds of short-barreled rifle territory while the fact it is chambered for rifle rounds could push it away from being classified as a shotgun. Either way, the legalese surrounding it is bound to be interesting.

No other specs or pricing information is currently available, but Jacobson says they will be bringing the gun to SHOT Show later this month so you can expect more information to be forthcoming.