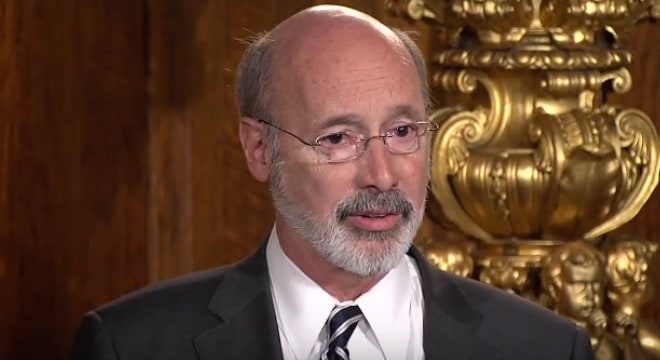 Both gun rights attorneys and Republican lawmakers have pointed out that state law provides a wide range of firearms restrictions during a declared emergency such as the one signed by Wolf this week. (Photo: PA Governor’s Office)

Pennsylvania Democrat Gov. Tom Wolf is getting heat over the prospect that an emergency declaration on the state’s opioid epidemic may target firearms as a side effect.

Wolf signed a sweeping 90-day disaster declaration on Wednesday characterizing the state’s heroin and opioid problem a public health emergency, saying he was using “every tool at my disposal to get those suffering from substance use disorders into treatment, save more lives, and improve response coordination.”

However, both gun rights lawyers in the Commonwealth and Republican lawmakers soon pointed out that state law provides a wide range of firearms restrictions during a declared emergency including carry bans in certain public areas and the prospect of gun confiscation.

“There is no reason why addressing this crisis should come at the expense of our Second Amendment rights,” said state Sen. Scott Wagner, R-York, who is mounting a campaign to challenge Wolf for his job in November. “The sloppiness of this declaration is another example of the incompetence of this administration, and calls into question whether this was a good faith effort from the Governor to help those suffering from addiction or just another thoughtless political ploy to silence the critics who’ve been saying hasn’t done nearly enough on the issue.”

Wolf’s office was quick to fire back Thursday, saying that disaster declarations are frequently issued by the state, such as in extreme weather, without affecting gun rights.

“The governor’s declaration does not allow for law enforcement to confiscate firearms, and the governor worked with law enforcement to ensure that his actions to fight this epidemic have no impact on citizens and their firearm rights,” J.J. Abbott, a spokesman for Wolf, told the Public Opinion. “Any implication otherwise to score cheap political points around the greatest public health crisis in our lifetimes is flat-out wrong.”

Wolf, who at the time carried an “F” rating from the National Rifle Association, defeated Republican Gov. Tom Corbett in 2014 and, while he has signed at least one pro-sportsman bill which passed with veto-proof margins and promised to respect the gun rights of medical marijuana users in the state, he has also pledged to scuttle strong Second Amendment legislation and has thrown his support behind a drive to increase mandatory relinquishment of firearms after misdemeanor crimes of domestic violence.

As noted by the AP, Pennsylvania is the eighth state to declare a public emergency to combat the addiction crisis. Wolf’s office noted the declaration would let Commonwealth officials “override any current rules or regulations they perceive as hampering the state’s ability to address the opioid epidemic.”