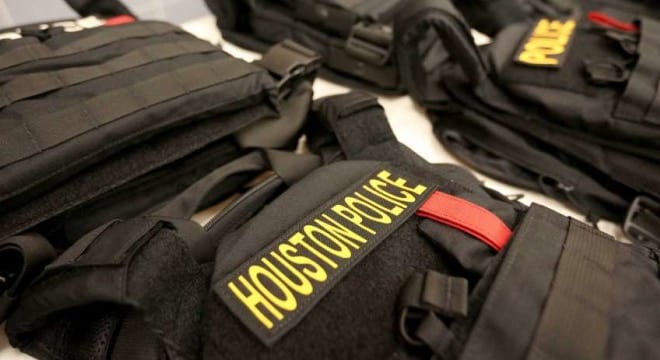 Grant money for $23 million worth of ballistic vests designed to protect against rifle fire is on the way to departments across Texas. (Photo: Yi-Chin Lee/Houston Chronicle)

Republican Gov. Greg Abbott this week announced funding for millions of dollars worth of rifle-resistant vests to police departments across the Lone Star State.

The more than $23 million provided to Texas law enforcement agencies of all sizes comes as a result of a successful Senate bill signed into law last year. In all, 453 agencies will divvy up money for 32,842 vests designed to better withstand rifle rounds than traditional soft body armor typically used by police in the state. The move follows a deadly 2016 encounter in which a subject armed with a rifle ambushed and killed five officers in Dallas at the end of a protest.

“The job of our law enforcement community is becoming more difficult as the threats our officers face continue to increase,” said Abbott in a statement, timed to coincide with Law Enforcement Appreciation Day. “The State of Texas will not sit idly by and tolerate these actions against officers who are simply doing their job to uphold the law and protect the people of Texas.”

Dallas was among the largest recipients of the grant, for 2,565 vests valued at over S1.7 million. “Thank God for this bill,” said Dallas Police Association president Michael Mata. “Officers can’t afford, a lot of times, to have that type of equipment.”

The measure that funded the program, SB 12, was shepherded through the legislature by Lt. Gov. Dan Patrick and saw an almost unanimous approval. The only legislator to cast a “nay” vote against the proposal during its passage was Houston Democrat Rep. Harold Dutton. Harris County, where Houston is located, received 4,385 vests worth over $3 million while the Houston Police Department was earmarked for 3,620 pieces of the protective armor. That city had previously received 600 vests purchased through the Houston Police Foundation.