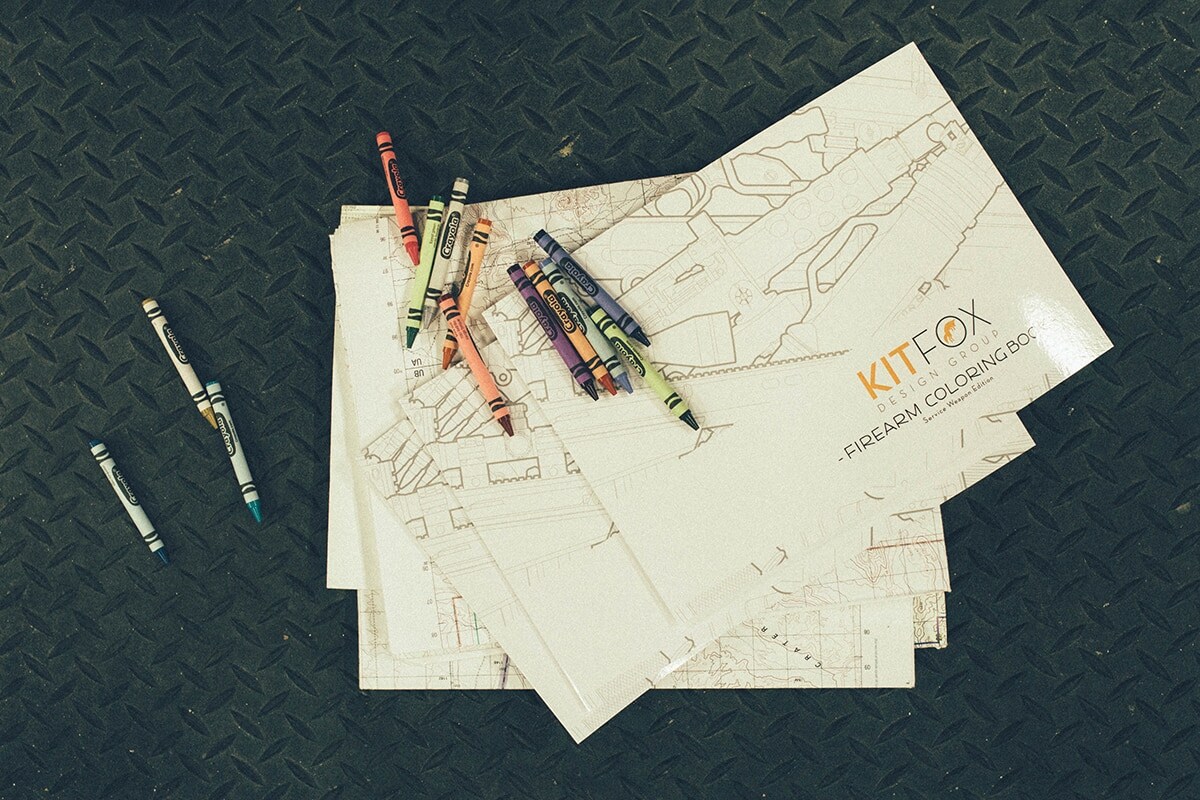 Kitfox Design Group is back at it with a second iteration of its popular coloring book series, ushering in the Service Weapon Edition.

The Service Weapon Edition follows Kitfox Design Group’s original coloring book the appropriately named, Firearm Coloring Book. At the helm of Kitfox is Sara Westman, a graphic designer with serious chops, dedicated to adding some firearm flair to the coloring world. Westman’s first firearm coloring book took the designer on a whirl-wind ride, gracing the screens of NRATV as well as the online pages of Forbes. The coloring book was such a success, Westman fielded multiple requests from companies looking to see some action in a second production.

“With the second book I actually had a lot of companies reach out to me who wanted to be involved more so than me having to reach out to them,” Westman told Guns.com during a phone interview. “Barrett was one of the first companies who said whatever you do next we want to be involved. I knew about that back in February or March (of 2017) which is kind of what inspired doing a service weapons book.”

Westman landed some big names in the military and tactical world for the Service Weapon Edition.  Nestled within it’s covers names like Barrett, B.E. Meyers and Gemtech lend serious authority to the military themed book.

“It’s just mostly your general service weapons. We have like the nice M110 … the B.E. Meyers MAWL is in the book along with the Gemtech Aurora suppressor,” Westman said.

Though some notable brands are prominently featured, Westman said the book generally keeps advertising to a minimum, opting to focus more on the rifles than the powerhouse companies behind them. “It’s not as heavily sponsored this year because I didn’t need sponsorship to get it off the ground; but I wanted to involve those who wanted to be involved,” she commented.

Kitfox Design Group announced the second book in the fall with pre-orders starting September 2017. Despite a rocky production phase, Kitfox’s loyal customers remained by the company’s side as Westman and her team worked tirelessly to bring the second coloring book to fruition.

“It took us forever to get from permission to actually printing. There were just a speed bumps along the way. So we’ve been dealing with that just you know fighting forward on getting that stuff done,” Westman said. “Everyone who pre-ordered back in September and October has been super patient and we’re just really excited to get it in their hands.” The first coloring book’s mission last year was to provide parents and caregivers with the tools to teach firearm safety, so it’s no surprise that Westman and Kitfox have crafted a new mission for the new book and the new year. This time around, Kitfox is focusing its efforts on serving those that serve the U.S. abroad.

The design group is currently in talks with various non-profit organizations to bring the Service Weapon Edition to active duty and retired military members. Specifically, Westman is trying to supply the brave men and women in the U.S. Armed Forces with coloring books to help ease stress on the front lines.

“We had a lot of people reach out who were deployed and whose family members sent them the original books. They were super grateful and really liked the idea; so that’s what helped inspire the concept,” Westman said. “It’s a big thank you to our active duty and retired military.”

She added, “I have sponsors who are paying for books so I can send them overseas to squadrons and groups of guys who are deployed along with like crayons and whatnot. We have a couple we’re testing right now with a couple of groups of people that I personally know so I can get actual feedback.”

The Service Weapon Edition is available now for civilians and those stateside from Kitfox Design Group with a retail price of $14.99.