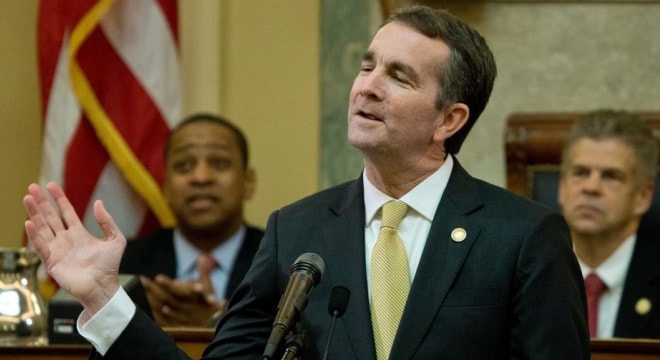 Just after Gov. Ralph Northam was inaugurated, a Virginia Senate committee rejected a number of gun control bills backed by the Democrat.

The Republican-controlled Senate Courts of Justice Committee met for over three hours in their first workday of the session Monday and quickly disposed of several measures in party-line votes including one on universal background checks and another to seize guns from those deemed at risk. Northam, who had the strong backing of gun control advocates on the campaign trail, quickly addressed the topic with lawmakers in his first speech to the General Assembly.

“Gunshots kill more people in Virginia every year than car accidents, but if you walk into the right gun show, it’s easier to get a firearm than it is to rent a car,” Northam said. “There are many actions we should take over our time together to save lives by reducing gun violence. Let’s start by keeping guns out of the hands of people who shouldn’t have them by passing universal background checks.”

Other gun control bills sent packing were SB2, which would expand regulations against those with guns who were using drugs or alcohol; SB 794, which would ban the sale of magazines capable of holding more than 10 rounds of ammunition; and two measures allowing the County of Albemarle and the City of Charlottesville greater ability to ban the carry of firearms locally.

Monday’s actions mimicked those of the Senate two years ago when the same committee scuttled a dozen gun control bills backed by Gov. Terry McAuliffe. The Democrat returned the favor in 2016 and 2017 in a series of vetoes on gun rights expansions while Northam, then Lieutenant Governor, cast the tiebreaking vote to kill a constitutional carry bill on the Senate floor.

One proposal that did make it out of committee this week was SB1, which passed 11-4. The measure takes aim at bump stocks, termed “mechanical devices designed to increase the rate of fire of firearms,” making possession of such accessories in the state a misdemeanor. Another, SB 669, designed to limit access to guns for those 14 years of age or younger who had undergone mental health treatment, was reported out unanimously.