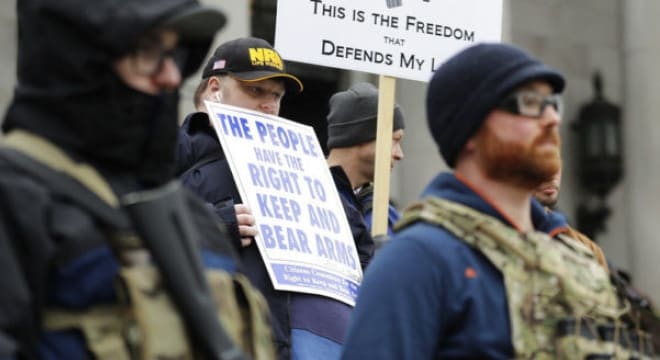 Second Amendment advocates at a gun rights rally last Friday at the Washington Capitol in Olympia, protesting a series of bills currently under review in the Democrat-controlled state legislature. (Photo: Ted S. Warren/AP)

The Senate Committee on Law and Justice heard testimony from gun control advocates and Attorney General Bob Ferguson on a host of bills that would ban bump stocks as well as magazines capable of holding more than 10 rounds, and require waiting periods and extra background checks for those buying “assault weapons” in the Evergreen State.

“These are common-sense bills that will improve public safety and save lives,” Ferguson told lawmakers. “When I meet with Washingtonians from all parts of the state, they are stunned to learn we have no limits on magazine capacity and do not require waiting periods to purchase assault weapons.”

The bump stock ban, SB 5992, targets what the bill calls “trigger modification devices” in a broad definition. In its language, it would make it a felony in the state by 2019 to manufacture, own, buy, sell, loan, furnish, or transport classified devices with no prospect to legally own those currently in circulation.

Ferguson, who has long championed increased gun laws in the state and Gov. Jay Inslee have both called for action on bump stocks.  However, though chamber Democrats currently enjoy a slim one-vote majority in the Senate, at least one Dem has signaled he doesn’t have the appetite for a sweeping ban on trigger devices.

“You can pull in a lot of modifications that have nothing to do with the bump stock issue,” said state Sen. Dean Takko, D-Longview, though he did say he was willing to “look at it” if the language was modified.

Another bill, SB 5444, would require a state license to buy, own or sell a gun classified as an “assault weapon” as well as any magazine capable of holding more than 10 rounds. Only those over 21 would be allowed to make such purchases, and all would be subject to a waiting period of up to 10 days.

“Law-abiding Washingtonians should not be prohibited from possessing these popular firearms just because anti-gun legislators want to enact at least some part of their political agenda this year,” said the National Rifle Association in objection to the bill. “Further, this legislation would have absolutely zero impact on crime.”

A third proposal, SB 5463, would both mandate that gun sellers provide a locked storage box to new buyers and that the box be used by the owner to secure the gun.

SB 6049 would ban “high-capacity magazines” defined by the act as any capable of holding 10 or more rounds while SB 6146 would scrap state preemption law and allow cities and counties across Washington to determine their own local gun ordinances.

The bills are part of the Washington-based Alliance for Gun Responsibility’s legislative agenda and the group reportedly bussed in speakers to flood legislative halls Monday. These included survivors of the Route 91 Harvest festival shooting in Las Vegas last year where bump stocks played a role.

Meanwhile, Second Amendment supporters are from across Washington have rallied to the capital area to protest the legislation though at least one well-known advocate said they were shut out of the hearings on Monday.

Committee votes on the measure are expected as early as Tuesday.