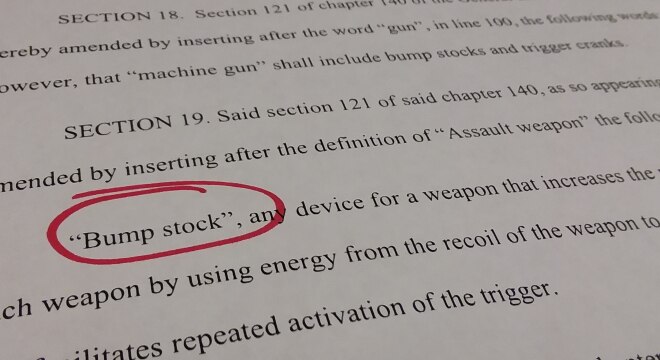 Massachusetts recently added definitions of “bump stocks” and “trigger cranks” to state law, directing a ban on both set for later this year. (Photo: Chris Eger/Guns.com)

Officials with the Commonwealth reached out to Massachusetts gun owners to caution them the clock is ticking to hand over any bump stocks or trigger cranks.

According to a statement by the Gun Owners’ Action League, the state’s National Rifle Association affiliate, letters have been going out from state regulators to licensed gun owners warning that the controversial devices are illegal after Feb. 1. The letter adds that those who have them will have a short time period to arrange for their surrender.

“Retention of such a prohibited item beyond the 90 day grace period will expose the owner to criminal prosecution,” says Daniel Bennett, secretary of the Massachusetts Executive Office of Public Safety.

Under the new state law passed as part of a spending bill, those found guilty of possession of such devices could face anywhere from 18 months to life in prison and there is no provision to grandfather the accessories.

“In our opinion this is an illegal and unconstitutional taking of property without compensation by the Commonwealth of Massachusetts,” says GOAL in a statement, advising they are weighing their options moving forward.

The state was the first to adopt a ban on the devices following their use in the Las Vegas Route 91 Harvest festival shooting that left 58 dead. Filling in for Republican Gov. Charlie Baker, Lt. Gov. Karyn Polito signed the measure into law just a day after the Commonwealth’s legislature forwarded the proposal to the governor’s office for consideration. Lawmakers rushed widely different bills through their respective chambers in October, only holding a token public hearing after the fact.

Under the ban’s framework, a bump stock is defined as a device that increases a gun’s rate of fire by using the recoil of the firearm “to generate a reciprocating action that facilitates repeated activation of the trigger.” Trigger cranks are classified as a device attached to a firearm that activates the trigger using a lever turned “in a circular motion,” with limited exceptions for guns such as Gatling guns which are specifically designed to use such a crank.

During the bill’s legislative process, state Attorney General Maura Healey led a call from 33 state and territorial attorneys general to Congress to ban the devices.

The state is not alone in its regulatory expansion targeting bump stocks. Down the Eastern Seaboard in New Jersey, Gov. Chris Christie signed a ban in that state earlier this week which went into effect immediately. Bump stock owners in the Garden State have 90 days to surrender their once unregulated accessories or face as much as three to five years in prison.