ATF: Stolen guns on the rise 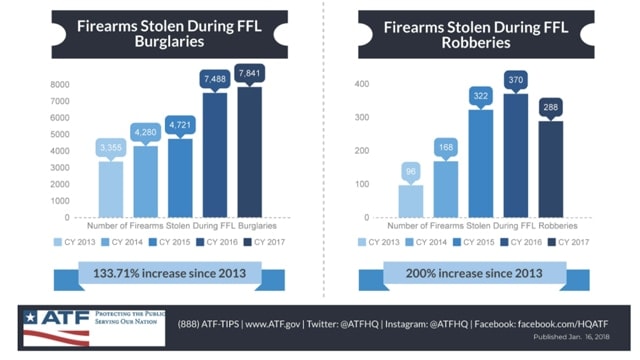 “Criminals know that gun stores can be easy targets to obtain armfuls of firearms in a matter of minutes,” said David Chipman, senior policy advisor at Giffords Law Center to Prevent Gun Violence. “Every successful break-in opens a new threat to our community and puts law enforcement officers at risk.”

Chipman served as an ATF special agent for 25 years and said despite the “alarming” increase in guns stolen from FFLs, states can help prevent the crimes with laws enforcing strict security standards for dealers.

He cited New Jersey as an example, where criminals have managed to steal three guns in two separate burglaries since 2013.  The state requires potential gun dealers implement security measures approved by state police before a Superior Court judge will issue a license.

“When states require gun dealers to take responsible steps to prevent their stores from being burglarized — by properly securing not only their stores, but the firearms themselves — they eliminate the risk of thieves taking off with weapons,” Chipman said. “We know how to solve this problem, but we need more states to acknowledge this issue and put best practices for reducing gun store theft into action.”