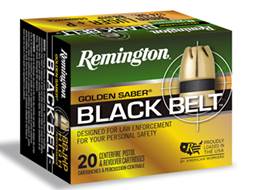 Remington is set to release the Golden Saber BlackBelt ammo years after it was first announced. (Photo: Remington)

After years of sitting, hoping, waiting and wishing Remington’s Golden Saber BlackBelt ammunition is finally leaving the factory and headed towards consumers.

Announced several years ago, Remington said the ammo got put on the back burner but is now ready to hit dealer shelves. The defensive style ammo will come in four flavors — 9mm Luger, 9mm Luger +P, .40 S&W and .45 ACP. Featuring the “ground-breaking” BlackBelt bullet, Remington says the bullet itself has been crafted using the Federal Bureau of Investigation’s Barrier Test Protocol.

Crafted with an hour glass shape and paired with the MechaniLokt belt, which locks the core and jacket together, the round is said to deliver both controlled expansion and penetration with high weight retention. The result according to Remington? Optimized terminal performance.

“Like the venerable Golden Saber, the bullet is constructed of a brass jacket in time-proven bullet profiles for reliable feed and function,” Remington said in a press release. “The spiral nose cuts and hollow point cavity are optimized for predictable and reliable terminal performance through clogging barriers such as wall board or heavy fabrics.”

Additionally, the company says the lead core is locked to the rear of the Black Belt bullet to prevent jacket/core separation during barrier penetration.

No word yet on pricing or ship date.