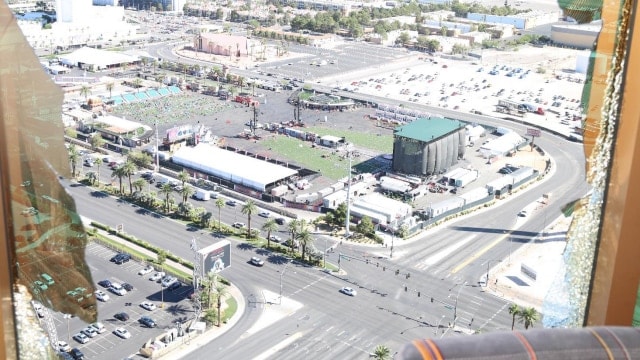 The window view from the gunman’s hotel room at Mandalay Bay when he opened fire at the crowd attending a country music festival on Oct. 1, 2017 in Las Vegas. (Photo: LVPD)

Sheriff Joe Lombardo explained releasing the report is not standard practice, but given the unique circumstances of the case — and the national impact it has had — his department decided to publish an update.

“As you can imagine this is a complex, protracted investigation and we have done a lot of work trying to piece together what happened,” Lombardo said Friday during a press conference. “It is my hope this report will provide the media and the public an understanding of what occurred on 1 October.”

On Oct. 1, Stephen Paddock, 64, opened fire from his hotel room on the 32nd floor of the Mandalay Bay Resort and Casino into a country music festival attended by some 22,000 people. Paddock used an assortment of rifles equipped with a bump stock, a device used to mimic automatic fire.

Given the massive size of the crowd, the number of people injured fluctuated in the early days of the investigation, but the report establishes that 422 people were injured directly by gunfire and 851 others were injured from other means.

The report offers a detailed overview of the findings so far as well as insight into Paddock’s planning and preparation for the attack, Lombardo explained. However, he clarified that investigators are still short on motive.

Investigators combed through “1,965 investigated leads, 21,560 hours of video, 251,099 images obtained and 746 legal notices filed or sent, nothing was found to indicate motive on the part of Paddock or that he acted with anyone else,” according to the report.

The report adds that Paddock did not leave a suicide note or manifesto nor was there evidence that he was a radicalized member of an ideological organization, or hate or terror group.

The closest thing to a motive, according to the report, Paddock’s girlfriend Marilou Danley told investigators that his demeanor had changed over the course of last year. He had become “distant” and they no longer had intimacy.

Also, over the course of last year, Paddock began to acquire lots of firearms — some 55 between October 2016 and September 2017 — which Danley thought was just his hobby.

Lombardo said he does not anticipate charges being brought against Danley, who was with Paddock in the days leading up to the attack and was inside the hotel room, but left the country before the attack occurred.

Lombardo also said they’re unaware that Paddock had any health issues. However, Paddock lost a significant portion of his personal wealth leading up to Oct. 1 and that could have been a contributing factor in his decision to commit the heinous act.

The report also includes a number of forensic photographs showing in the inside of Paddock’s hotel room, locations of victims, and random bullet impacts (hitting as far as airport property).

Lombardo gave an indefinite timeline to conclude the investigation, saying the final report will publish sometime in the future. A close estimate would be the end of the calendar year.