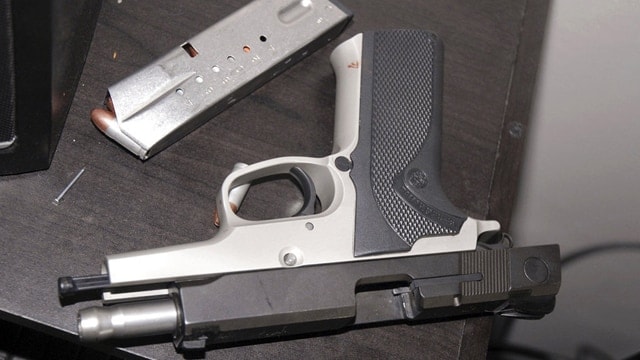 An Army veteran killed himself in Washington in 2014 with a gun seized by state police and traded away years earlier.

Yakima Police Detective Kasey Hampton told the Associated Press in a Jan. 8 interview the Smith & Wesson pistol 24-year-old Kyle Juhl shot himself with ended up for sale online after Washington State Patrol confiscated it and sold it to a firearms dealer.

State police, unlike other law enforcement agencies in Washington, must resell seized weapons, according to the Associated Press, rather than destroying or keeping the guns. Critics say the discrepancy returns guns into the hands of criminals and other prohibited buyers — including Juhl himself.

Despite this, however, Hampton said only Juhl’s DUI conviction appears during a search of the National Instant Criminal Background Check System — the database gun dealers use to verify a buyer’s identity and criminal history.

“No felonies were showing up on his record,” he said. “Nothing that would have prohibited him from possessing or owning a firearm.”

Family members said Juhl bought the pistol off Craigslist and shot himself two months before state law mandated background checks for private gun sales. Even so, the law wouldn’t have prevented Kuhl’s death.

“They let me know that it was common that sometimes there was a military conviction that wouldn’t be transferred over to our level,” he said.

Military reporting of service member criminal records came under scrutiny in November after an Air Force veteran killed 26 people at a church in Texas with a rifle his domestic assault convictions barred him from owning. Discharged from the military in 2014 after serving time in confinement for assaulting his wife and stepson two years earlier, Air Force officials never forwarded the shooter’s criminal records to the Pentagon.

Officials acknowledged their mistake made his crimes virtually invisible to gun dealers accessing NICS, saying in a press release “training and compliance measures were lacking.”

Secretary of the Air Force Heather Wilson and Air Force Chief of Staff Gen. David Goldfein directed an immediate review, forming two task forces of 30 staff each to comb through more than 60,000 cases dating back to 2002.

“Air Force officials are correcting all identified deficiencies as they are discovered and reporting them to civilian law enforcement,” military officials said in a statement days after the shooting. “The full review will be completed over the next several months.”

It’s too little, too late for a couple who lost nine family members, including their son, at the Sutherland Springs church Nov. 5. Joe and Claryce Holcombe filed a wrongful death claim against the Air Force last month for “utterly failing in their reporting obligations,” despite knowing — as far back as 1997 —  that service member convictions were missing from federal databases.

“I’m not surprised they are finding these lapses because this was clearly never a priority in the past,” said Don Christensen, a former chief prosecutor in the Air Force, during an interview with the New York Times last month. “Earlier inspector general investigations found that they were not doing this properly and the leadership never made it a priority to correct it.”