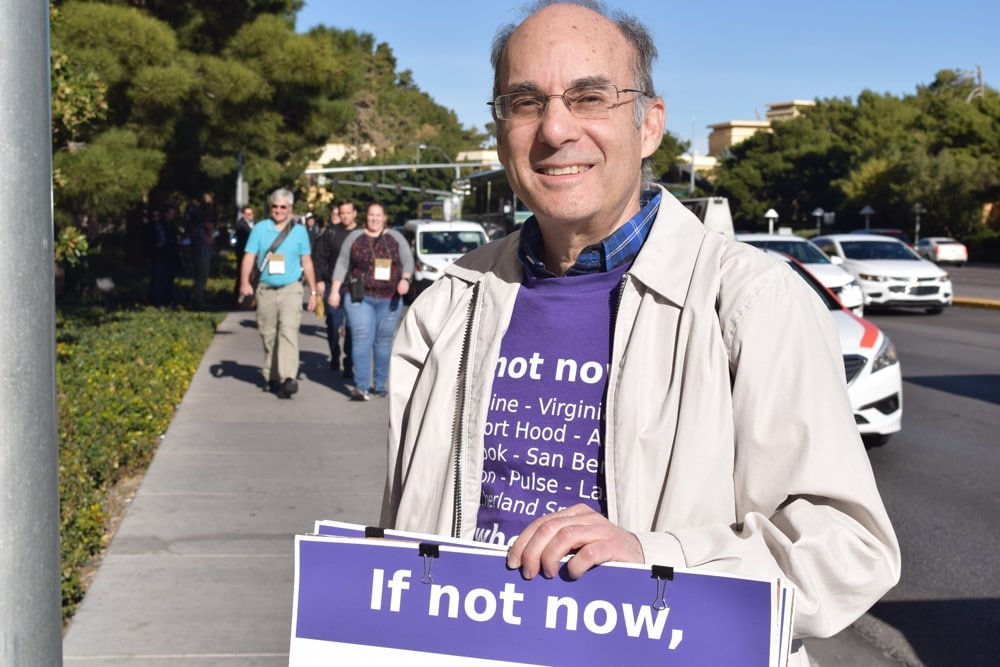 Lee Goodman, a Chicago native who heads Peaceful Communities, protesting on the sidewalk outside the Sands Expo during SHOT Show on Jan. 24, 2018. (Photo: Daniel Terrill/Guns.com)

Dozens of armed security guards were dispatched at the entrance of the Sands Expo to break up the protest of the gun industry’s annual trade show — the SHOT Show —  before it could really take off Wednesday.

Peaceful Communities sought to juxtapose the world’s biggest gun show near the site of one of the worst mass shootings in modern American history, according to Lee Goodman, the protest’s organizer.

“We’re calling on the industry to stop opposing legislation that would make people safer from gun violence,” Goodman told Guns.com in an interview Wednesday.

Goodman explained protestors — which, despite garnering national press coverage, appeared to just be the Chicago native — planned to march the nearly three miles from from the Sands Expo to the site of the October’s mass shooting at the Mandalay Bay Casino and Hotel. But expo and hotel security guards ushered Goodman onto the sidewalk near the property about 20 minutes before the scheduled march.

In October, a lone gunman opened fire into a crowd of about 22,000 attending a country music festival outside the hotel, killing 58 and injuring some 850 others. For several minutes, he sprayed hundreds of rounds using a device that mimics full-auto fire, mechanics that are heavily regulated.

The horror spurred action by lawmakers and organizations on both sides of the political aisle, with many agreeing to zero in on the bump stock device the gunman had used. Although legislation was filed, lawmakers are waiting for federal regulators to complete a review to see if current law allows them to regulate the item.

Also, the company that produces the device, Slide Fire, did not have a exhibit at SHOT Show despite setting up in years prior. Whether or not the company’s absence was a conscious decision is unclear. But Goodman said it didn’t matter.

“We’re not focusing on any particular product,” he said. “We believe the industry as a whole should be responsible for preventing legislation that would reduce gun violence.”

Although protests of industry events are a common occurrence, the proximity of the events was just a coincidence. The trade association, the National Shooting Sports Foundation, which manages SHOT, has held the event in Las Vegas for 20 of the event’s 40-year existence.

“The exhibitors and attendees are well aware of tragedies involving the criminal misuse of firearms and feel genuine sympathy for the victims,” said Mike Bazinet, NSSF public affairs director. “But they know that the lawful commerce in firearms serving millions of law-abiding citizens is completely unconnected to the actions of criminals or the seriously mentally ill who are intent on doing harm.”