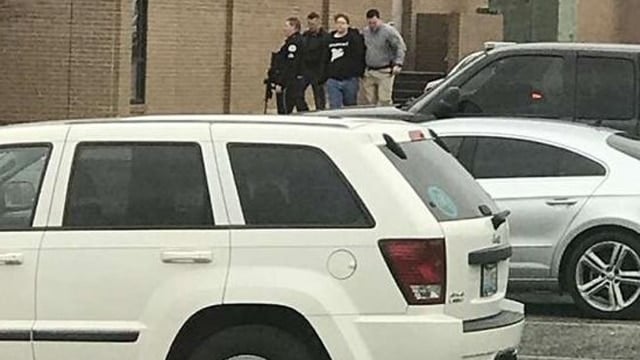 Police escort a person, second from right, out of the Marshall County High School after a shooting there on Tuesday in Benton, Ky. Gov. Matt Bevin said two people were killed and numerous others were injured in the shooting. (Photo: Dominico Caporali/AP)

A shooting at a high school in western Kentucky left two students dead and more than a dozen injured Tuesday, according to local law enforcement officials.

Kentucky State Police said a 15-year-old male gunned down 20 students shortly before 8 a.m. at Marshall County High School in the city of Benton, about 120 miles northwest of Nashville.

Police said of the 20 affected students — all between the ages of 14 and 18 — 15 suffered gunshot wounds. Three remain in critical condition and a fourth was upgraded to stable condition Tuesday evening.

“The souls of Marshall County have been bruised and the fabric of the community has been torn, but the people of Benton, KY and the surrounding communities are strong…,” Kentucky Gov. Matt Bevin told his Twitter followers Tuesday. “With faith in God and with reliance on friends and family, we will get through this dark day together.”

Witnesses described a chaotic scene in the moments after the shooting, with students fleeing for safety to nearby businesses.

“They was running and crying and screaming,” Mitch Garland told the Associated Press. “They was just kids running down the highway. They were trying to get out of there.”

Garland estimated at least 100 students escaped, including his own 16-year-old son.

“Everyone is just scared. Just terrified for their kids,” he said. “We’re a small town and we know a lot of the kids.”

Kentucky State Police Commissioner Rick Sanders said the shooter was taken into custody without violence and will be charged with two counts of murder and multiple counts of attempted murder.

It’s unclear whether he will be charged as a juvenile or adult.