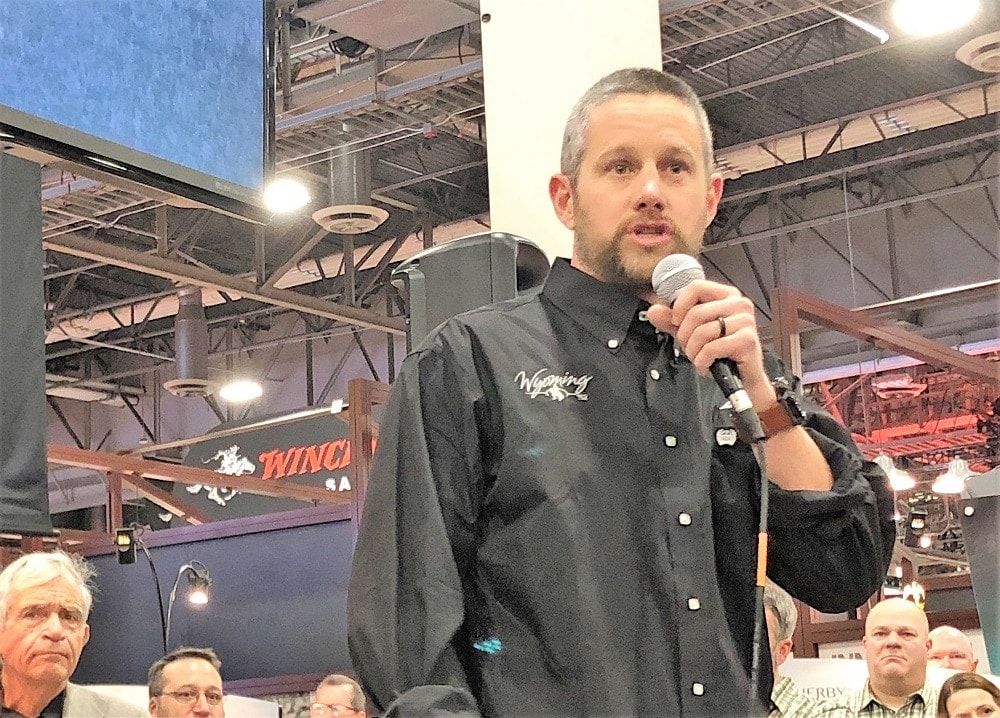 Adam Weatherby, a grandson of founder Roy Weatherby and current CEO of the company, said the move away from California just made sense. (Photo: Guns.com)

Wyoming Gov. Matt Mead was on hand at SHOT Show on Tuesday at Weatherby’s booth to announce the move from the West Coast to the Cowboy State.

The rifle and shotgun maker this week went public with the news of the planned move of its corporate headquarters and manufacturing center from Paso Robles, California to Sheridan, Wyoming, and Mead was at the firearm industry trade show to welcome the company after over a year of negotiations that concluded with a $12.6 million grant package.

“This is wonderful for Wyoming and for Weatherby,” Mead said. “Weatherby’s firearms will now be made in Sheridan and shipped all over the world.”

The move, expected to bring 70 to 90 jobs and $5 million in payroll over the next five years to the state, will see the Sheridan Economic and Education Development Authority build a 100,000 sq. ft. complex and lease the site to Weatherby for 20 years. For the company’s part, they will pump in $2 million in investment and moving expenses.

According to the most recent statistics from federal regulators, Weatherby produced 3,036 rifles in 2015 and exported 335 overseas. For the same year, there were no large firearms manufacturers listed as operating in Wyoming, though some 20 small custom makers were producing rifles.

Adam Weatherby, grandson of founder Roy Weatherby and current CEO of the company, said the move away from California just made sense.

“We wanted a place where we could retain a great workforce, and where our employees could live an outdoor lifestyle,” said Weatherby. “We wanted to move to a state where we can grow into our brand. Wyoming means new opportunities. We are not interested in maintaining; we are growing.”