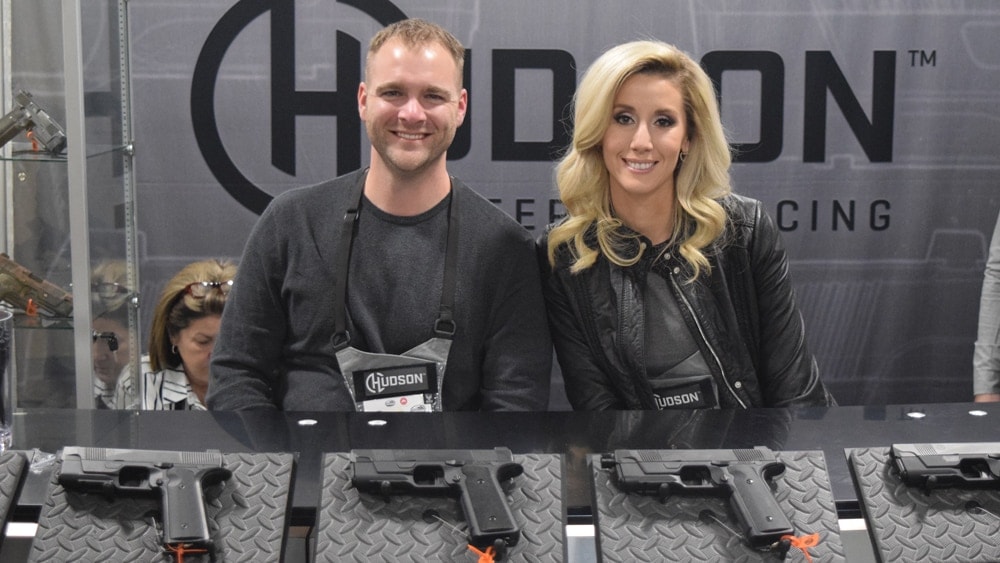 Cy and Lauren Hudson, owners of Hudson Manufacturing, at their booth during SHOT Show 2018 at the Sands Expo in Las Vegas. They introduced the H9A, a lighter version of the introductory model. (Photo: Daniel Terrill/Guns.com)

Despite hurdles with the initial production run of their introductory pistol, Texas-based startup Hudson Mfg. released a new, lighter version of their handgun design this week at 2018’s SHOT Show in Las Vegas.

With the H9A, the company re-constructed the design so it weighs half-a-pound less than the baseline H9 model, a striker-fired pistol with a 1911-style trigger, according to company owner Cy Hudson.

The company made a splash when they debuted at last year’s SHOT Show, garnering the attention of a variety of industry media and going viral among firearm enthusiasts, but ran into some hurdles later in the year that resulted in a delay in production.

“Our goal to ship was June 26. At around that time, we were finishing up testing. We ran our test pistols around 10,000 rounds in the space of three days, so the pistol was ready go,” Hudson said. “We were really excited, made a big announcement on social. Said ‘alright. here we go.’ Then, we had someone reach out and say ‘no, we want more money’ for something we had already paid for. It was a major machine component. And, we had to say no.”

Hudson said that his company had a media blackout from June until they shipped in October, just in time to appear at the annual trade show hosted by the National Association of Sporting Goods Wholesalers. The NASGW event is kind of like a precursor to SHOT.

Small business problems aside, the plan had always been to introduce the H9, bring it to market and then introduce a lighter variant. “We decided to stick to the plan. Everything else didn’t go to plan, but this one we were going to stick with,” Hudson said, adding that while 2017 was for the H9, 2018 would be for the H9A.

Hudson explained they had planned to tweak the design by using different construction materials. For the H9A, they built the frame out of aluminum instead of steel and used polymer grip panels and backstraps. In all, they shaved off eight ounces from the design and perhaps about $200 from suggested retail price. 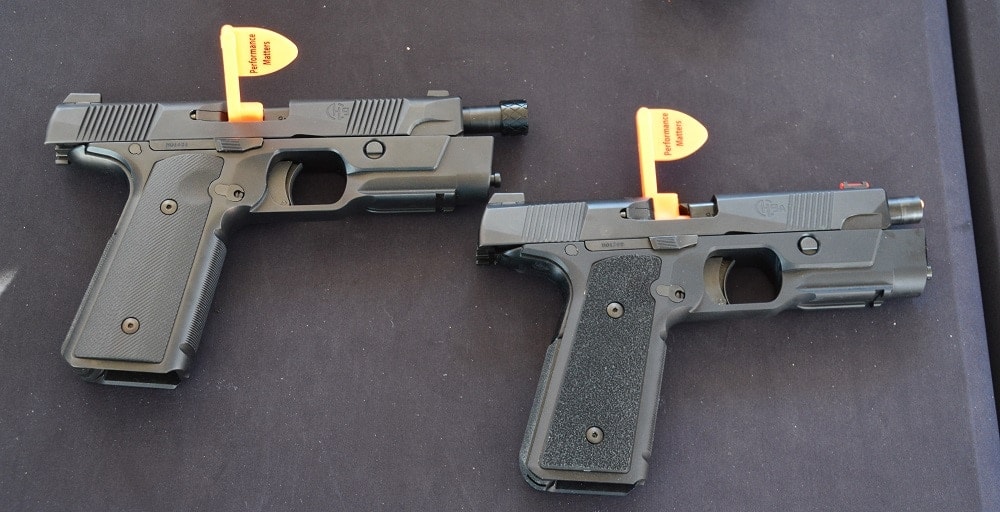 Hudson 9A, left, compared to the original Hudson 9. Note the change in ergonomics and grip panels, as well as the threaded barrel (Photo: Chris Eger/Guns.com)

However, he said there were skeptics who believed the H9’s 34-ounce weight made it shoot flat (as opposed to the design), but the 26-ounce variant “still shoots just as flat” because the design contains the same steel chassis.

Hudson and his wife, Lauren, dreamt up the initial design to combine the trigger of a hammer-fired 1911 pistol — a tried and true design that’s been popular for more than 100 years — with the modern striker-fire operating system. “Around 2013, we had the idea we could make a better pistol … We decided to throw all of our deployment savings — I was in the military and she was a contractor — into the project,” he said.

They were careful not to rush the design, so in a four-year-span, they went through three different pistol concepts and with each one, they made changes until figuring out what worked. Then, after debuting at 2017’s SHOT, they aimed to produce inventory, which they shipped in October and again last week.

Hudson declined to say how many guns went out — citing non-disclosure agreements and personal reasons (of not wanting to mislead fans) — but he shared a few hints. “Last week, we shipped more than we shipped in the entire month of October,” he said, adding the company is close to surpassing the benchmark — 2,000 units — set by competitive shooting organization, the United States Practical Shooting Association.

For the most part, Hudson Mfg. seems to be following the natural progression of a gun company by offering variants of a baseline model that contain features determined by demand. A quick and easy option, for example, is offering a variant with a threaded barrel, which Hudson said one will be released soon. But, in that same vein, that baseline model will always be a blank slate.

“There’s other things we could do. Right now, the sky’s the limit with where we can go with this platform,” Hudson said. “And where we ended up — you asked about this story — where we ended up, we’re pretty happy with.”