So yeah, we're thinking the Auto Mag in .44AMP is back (PHOTOS)

Though more sedate Auto Mag Classic series pistols are shipping, there is one exhibition model in circulation with a bit more pizzazz. (Photos: Chris Eger/Guns.com)

Dirty Harry’s biggest magnum is back in production and was on hand at SHOT Show in numbers and varieties not seen since the 1980s.

The huge .44 Auto Mag pistol, a favorite of larger than life crime fighters to include Inspector “Dirty” Harry Callahan and Mack “The Executioner” Bolan, has been out of standard production for more than 30 years, but a rebooted company, with the help of Excel Arms and some key players from the old AMT days, have brought the gun back to life. For some, it has been the dream of a lifetime.

“I’ve wanted one of these ever since I was a kid, but this is the first time I’ve ever held one,” a gun store owner from Texas remarked as he milled in line at Excel’s booth in Las Vegas on Wednesday for a chance to lay hands on the exhibited guns. 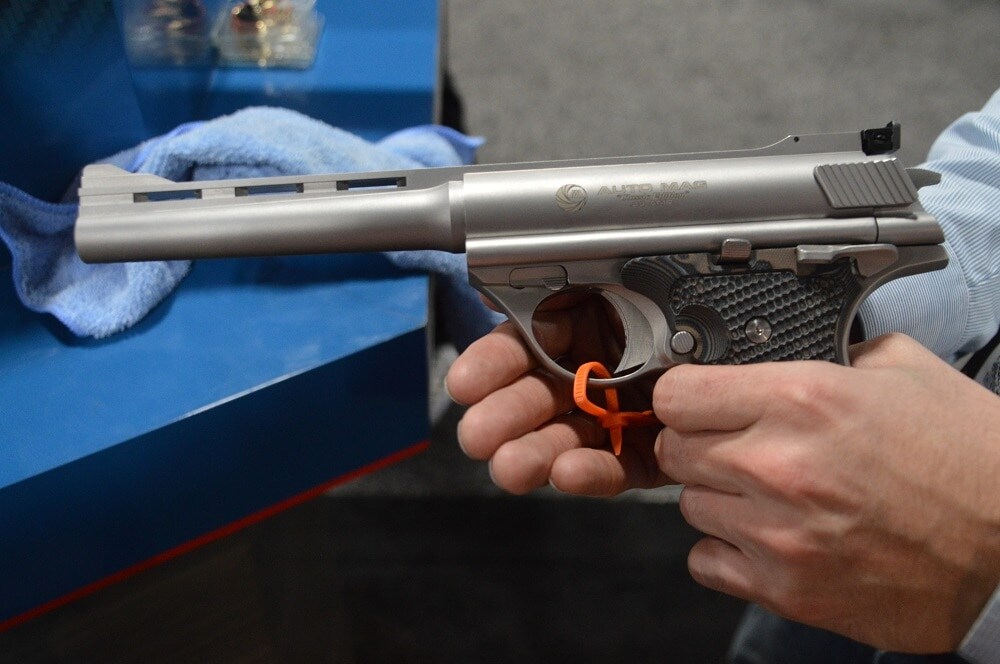 Current Auto Mag production is based on the Classic model, shown here, available in either 6.5 or 8.5-inch barreled variants. 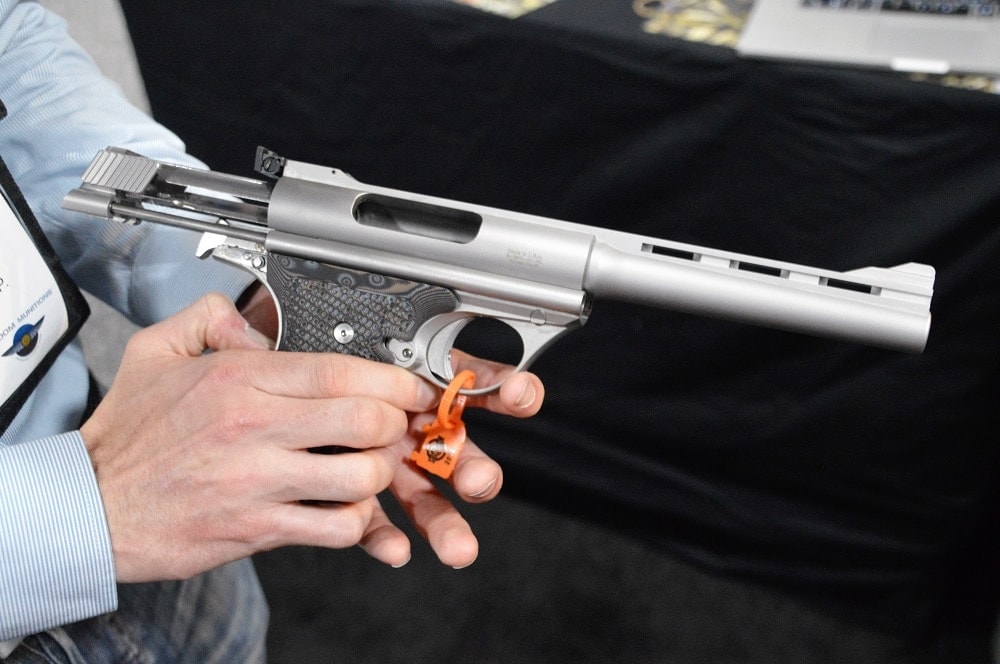 Auto Mag’s president, Patrick Henry, told Guns.com it’s the same story over and over. With less than 10,000 original Auto Mags out there, and those numbers declining through attrition every year, the guns are rare and often cherished collectors’ items that rarely get a chance to leave the safe. Therefore, seeing a collection of them– brand new– is a jolt.

“It’s amazing to see guys stop as they walk past and then one will turn their head and gape and then grab their buddy and pull them over to take a look,” said Henry, who has shepherded the South Carolina-based company, reborn in 2015 with the express purpose to bring the iconic gun back from the dead. 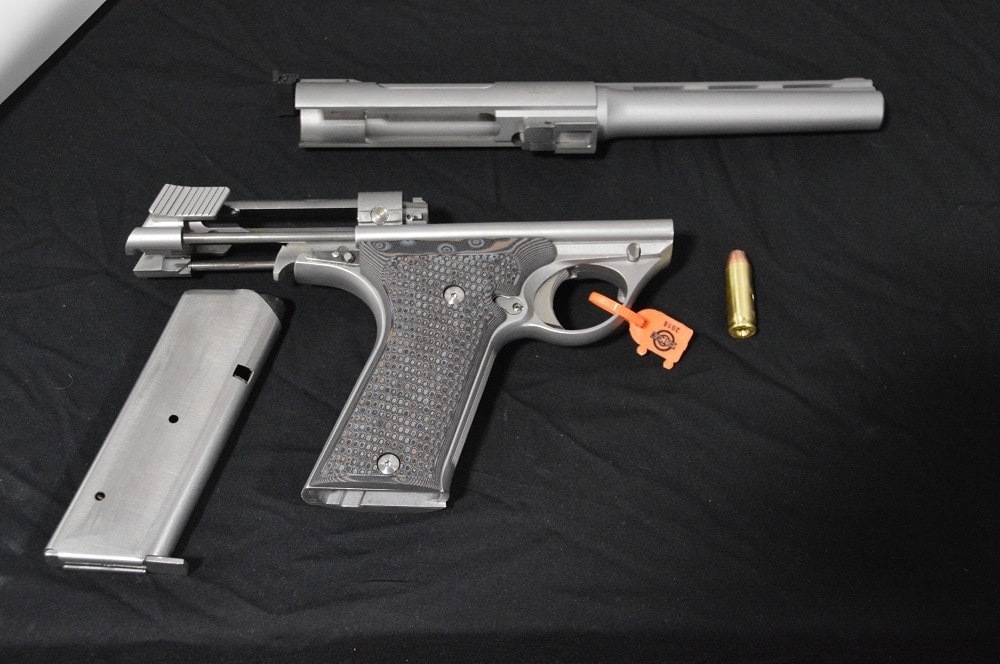 No matter how you slice it, the Auto Mag is “Big Thunder” 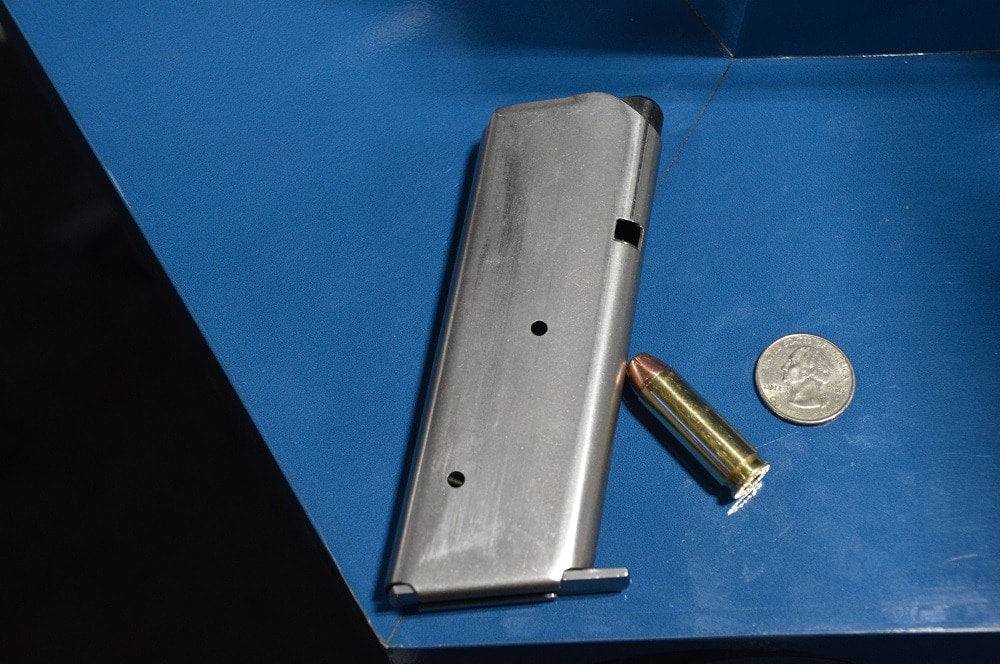 Most who are not familiar with the .44AMP are taken aback by its size, which predated such modern beasts as the .50AE by three decades.

One of the original AMT engineers, Larry Grossman– who personally had a hand in getting an Auto Mag to Clint Eastwood in 1980– has been working with the new company and was pleased to see the gun reborn. The happy Grossman, referred to in AMT circles as “the Godfather of the .44 AMP” was front and center, pointing out the new manufacturing process using modern CNC techniques behind the second generation hand cannons. For example, the barrel rib on the legacy guns was welded on and often subject to separation, while the new models are all one-piece. 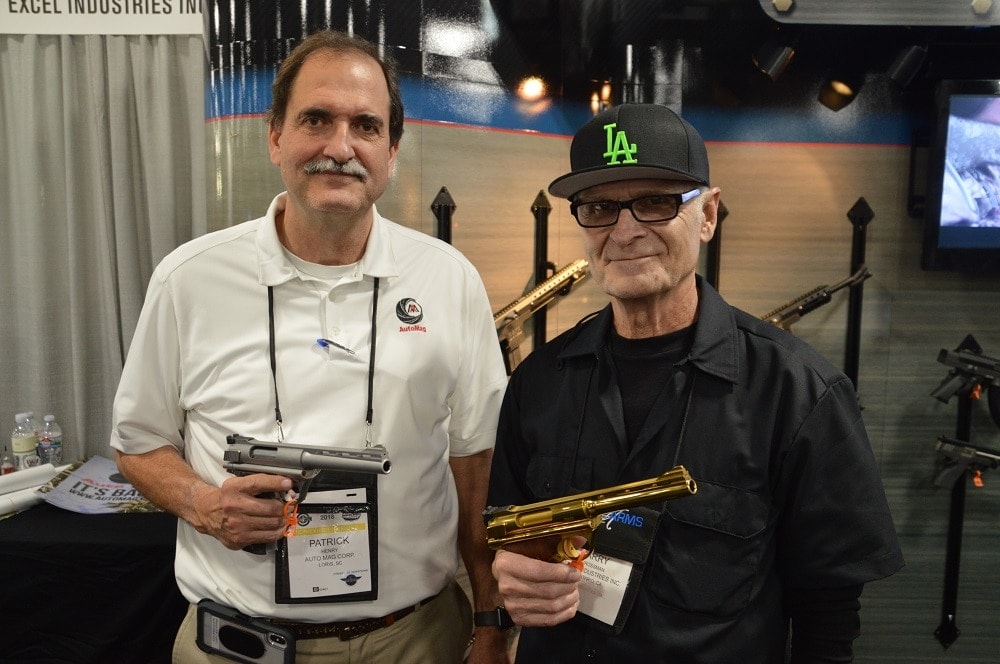 Henry and Grossman, proud to see the rebirth of the venerable Auto Mag.

There are other enhancements. While .44 AMP round is back in production (SBR sells full up rounds while Starline sells brass in bulk), there is also an effort underway at the company to market a barrel capable of shooting the more readily available .45 Win Mag. There were also Cerakoted black Auto Mag Classic models on hand in Las Vegas as well as the sole gold specimen in existence– a favorite of Grossman’s. 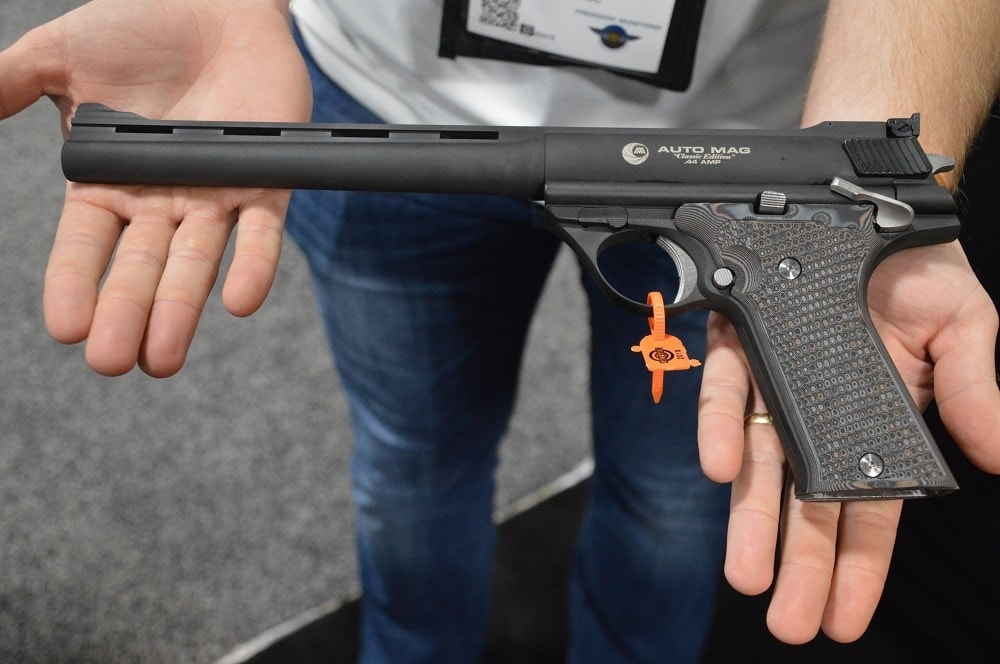 All Auto Mags continue forward with the iconic “spider down the drain” logo, as seen on even this 8.5-inch Cerakoted prototype. Company officials say the concept guns have proven so popular at SHOT they may become standard catalog options.

Auto Mag is shipping a small batch of exclusive Founder’s Edition models currently while taking orders for the standard Classic models at $3,795 with the options for either 6.5 or 8.5-inch barrels and G10 or checkered wood grips.

Current production rate is at about 100 pistols per month, which they hope to scale to about 400 soon.