Paper City Firearms introduces The Stinger, a new take on the bayonet (VIDEO) 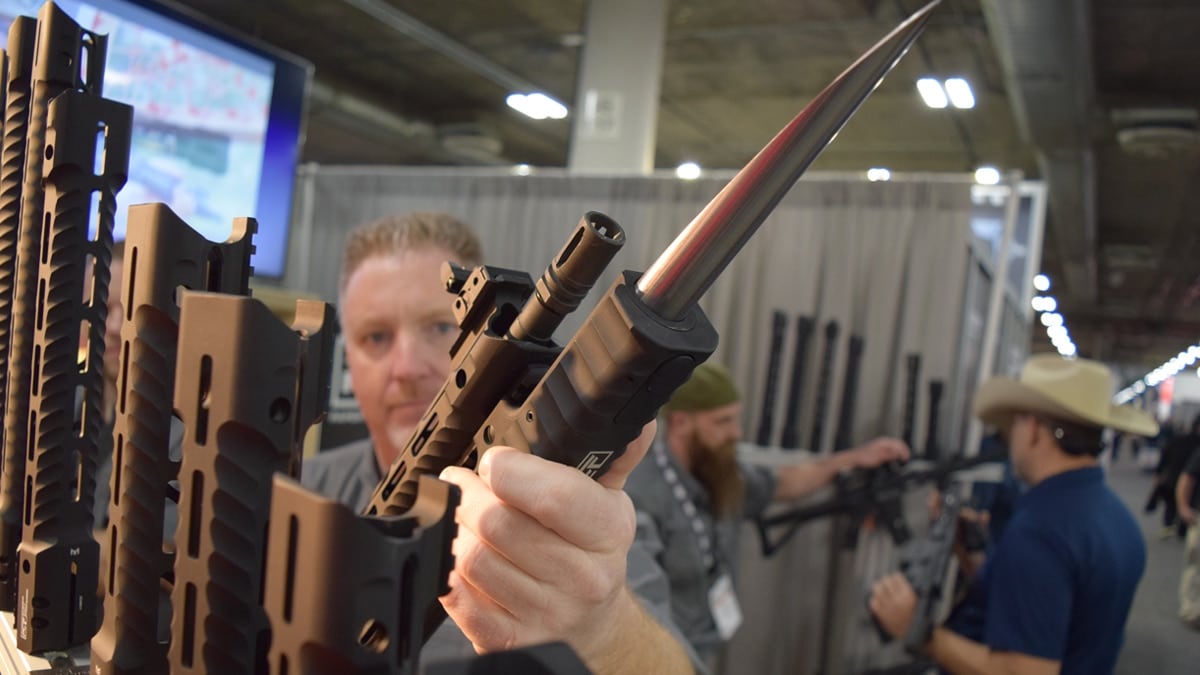 Pete Kennedy, part owner of Paper City Firearms, demonstrates how to use The Stinger, a new take on the bayonet, at SHOT Show 2018 in Las Vegas. (Photo: Daniel Terrill/Guns.com)

Gun store and parts maker Paper City Firearms — named after its hometown of Holyoke, Massachusetts, the world’s largest center for papermaking — highlighted a new take on the bayonet at last week’s SHOT Show in Las Vegas.

Pete Kennedy, who owns part of the company, showed off their prototype for The Stinger, a rapidly deployable bayonet system at the company’s booth on the lower level of the Sands Expo. The device enclosed in a metal tube attached to the rail system of an AR rifle near the muzzle where an ordinary bayonet would.

“The purpose of this — and it’s something that people are freaking out like ‘oh, my god I can’t believe this is coming to the AR-15 market’ — we actually developed this for the military and for SWAT teams to give our guys a fighting chance,” said Kennedy, who had retired as a police detective sergeant before joining the company.

He demonstrated how the device works. The blade — basically a stainless steel spike — slides out of the tube with the push of a button and locks in place. To retract it, he unlocked it by hitting the same button and then pushed it back in.

“One of the nice things about this is when it’s not deployed, unlike a regular bayonet … you don’t see the blade until you need it. So, you’re not putting people on the defensive,” Kennedy said.

He explained the ideal use for the device is breaching doors. “You can kind of go through any wood door like butter with this thing, for tire deflation or close quarters combat,” he said, adding “well, you could use it for a lot of different things.”

Paper City gained a lot of attention at SHOT Show with The Stinger, and even a new concept for possible use. “We’ve had a lot of response from people in Texas wanting to use this while they’re hog hunting,” he said.

Final designs have not yet been set, so there’s no word on how much the device would cost, according to Kennedy. “We’re going to make a few modifications to lighten up the weight. We’ll use polymers for the handle itself. We may go with a carbon fiber blade. We currently have a stainless steel blade,” he said.

Paper City’s website said The Stinger will be available soon, but also had a host of new products on display at the show and online. Things like The Nub, a modular fore-grip that’s metal, hollow, waterproof and attaches to an M-Lok rail system; a new low-profile gas block system; and a quick attaching and detaching iron sights.