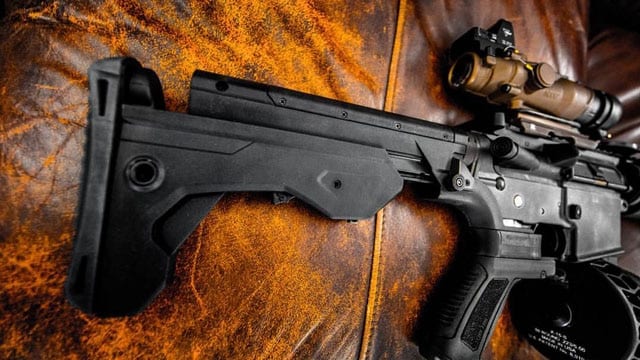 The ATF closed the public comment period on bump stocks as it prepares to reexamine the device’s classification under federal law. (Photo: Slide Fire Solutions/Facebook)

The Bureau of Alcohol, Tobacco, Firearms and Explosives closed the public comment period on bump stocks Thursday as the agency prepares to re-examine the controversial device’s classification under federal law.

Bump stocks made headlines Oct. 1 when a lone gunman modified at least a dozen rifles with the accessory and sprayed bullets into a crowded music festival on the Las Vegas strip, killing 58 and wounding some 850 others.

The deadliest mass shooting in modern U.S. history stirred the gun control debate on Capitol Hill, with leaders on both sides of the aisle — including House Speaker Paul Ryan, R-Wisconsin, and Attorney General Jeff Sessions — calling for the ATF review bump stocks and reconsider a ban.

Even the National Rifle Association pressured the agency into revisiting its intial 2010 ruling, telling cable media hosts the ATF “needs to do its job.”

“ATF needs to look and if there’s technology that’s come to the market that allow for a semi-automatic rifle to function as a fully-automatic rifle, they need to be regulated differently,” Chris Cox, NRA’s lobbying director, told Fox News during an interview in October. “We didn’t talk about banning anything. We talked about ATF going back and reviewing whether or not these are in compliance with federal law.”

The agency published an advanced notice of proposed rulemaking in the Federal Register last month, seeking public comment from manufacturers, retailers and consumers about bump stocks and similar devices.

“This ANPRM is the initial step in a regulatory process to interpret the definition of machine gun to clarify whether certain bump stock devices fall within that definition,” the agency said. “If, in a subsequent rulemaking, the definition of machine gun under section 5845 (b) is interpreted to include certain bump stock devices, ATF would then have a basis to re-examine its prior classification and rulings.”

Although the devices existed in relative obscurity prior to the shooting, the ATF knows bump stocks well. In 2010, Texas-based bump stock manufacturer Slide Fire Solutions sought a determination from the agency regarding their product’s classification under the Gun Control Act of 1968 and the National Firearms Act of 1934.

At the time, ATF deemed bump stocks as nothing more than an unregulated accessory — not a machine gun, or capable of converting a semi-automatic firearm into a fully automatic fireram, either. Rick Vasquez, the now retired agent who made the call eight years ago, stood by his decision in an Oct. 7 Facebook statement.

“The Slide Fire does not fire automatically with a single pull/function of the trigger,” he said, noting the single pull trigger remains integral to the definition of a machine gun. “It is designed to reciprocate back and forth from the inertia of the fired cartridge. When firing a weapon with a Slide Fire, the trigger finger sits on a shelf and the trigger is pulled into the trigger finger. Once the rifle fires the weapon, due to the push and pull action of the stock and rifle, the rifle will reciprocate sufficiently to recock and reset the trigger. It then reciprocates forward and the freshly cocked weapon fires again when the trigger strikes the finger on its forward travel.”

The Firearms Policy Coalition — and other gun rights groups — said the ATF’s initial determination should stand. The organization submitted comments last week to the agency detailing its “strong opposition” to reclassifying bump stocks under federal law.

“This troubling ANPRM raises serious constitutional concerns, including the violation of the separation of powers, abdication or improper delegation of authority, violation of fundamental rights guaranteeing citizens due process, protection against discriminatory and arbitrary enforcement of vague laws, and violation of the Takings Clause,” said Brandon Combs, president of the FPC. “Not to mention an affront to the fundamental, individual Second Amendment right to keep and bear arms. Should the Department of Justice and BATFE pursue this attempt to unlawfully and unconstitutionally exceed their statutory authority through regulatory efforts like this targeting these non-firearm devices, FPC (and almost certainly many others) will be forced to seek judicial relief.”