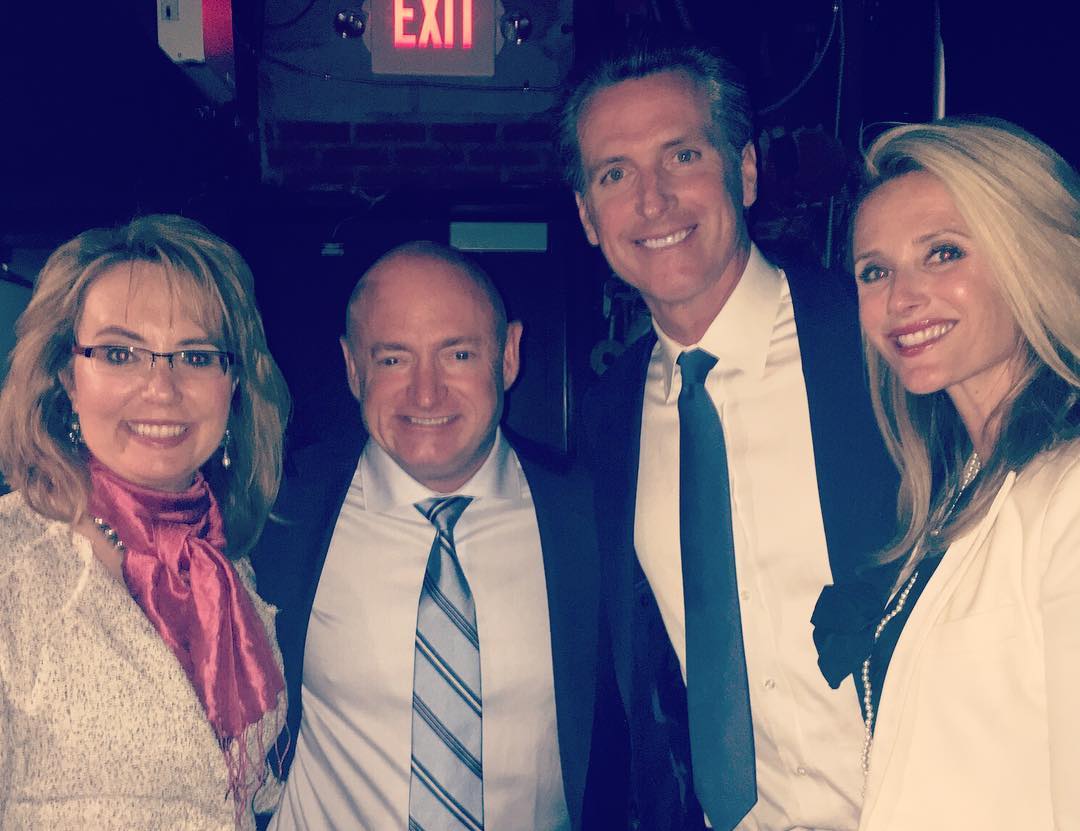 California Lt. Gov. Gavin Newsom, seen in a 2016 photo with former U.S. Rep. Gabrielle Giffords and Mark Kelly, who recently endorsed him for governor based on his gun control record. (Photo: Newsom’s office)

Lt. Gov. Gavin Newsom, the architect of California’s new ammunition regulations, has garnered support from Giffords to become the state’s next governor.

The gun control group founded by former U.S. Rep. Gabrielle Giffords and Mark Kelly announced their endorsement of Newsom last week, saying the Democrat had “demonstrated time and time again” he was a champion for stronger firearm laws.

“California has set an example for other states to follow and has tackled the epidemic head on, but there is more work to be done,” said Giffords in a statement. “Lieutenant Governor Gavin Newsom’s exceptional record as a gun safety champion makes him uniquely qualified to take on that challenge.”

Newsom, the former mayor of San Francisco and political ally of U.S. Sen. Kamala Harris, announced his candidacy for this year’s gubernatorial race back in 2015. Since then, he has tapped fellow Dems and a host of billionaire West Coast philanthropists to fund a $5 million ballot measure to entrench a host of new guns and limit ammunition sales in the state. That drive, Prop. 63, was opposed by a broad coalition of groups but was approved by voters and went into effect this month.

Further, the state’s no. 2 Democrat has waged a running battle on social media against the National Rifle Association for years, frequently tweeting against the membership group. However, this tactic has sometimes boomeranged such as when he attempted to publicly harangue Olympian competition shooter Kim Rhode on the subject of ammo controls or was confronted with persistent questions during a Facebook Live event about past associations with Shrimp Boy Chow or Leland Yee.

Newsom, facing a June primary against a crowded field of Democrats including former Los Angeles Mayor Antonio Villaraigosa, is leading the pack in current polling.

Second Amendment advocates were not shocked by the Giffords’ endorsement of Newsom.

“It’s not surprising that the same Giffords people who spend their lives attacking our constitutional rights would pick Gavin Newsom to be their lapdog,” Brandon Combs, president of the advocacy organization Firearms Policy Coalition, told Guns.com. “Gavin and Giffords are a match made in anti-rights authoritarian heaven.

Combs forecast that should Newsom move into term-limited Gov. Jerry Brown’s office it would be a dark day for gun owners in the state.

“Californians who value freedom need to get politically active, and quickly, or a Giffords-backed Governor Newsom will make Jerry Brown look like Ronald Reagan,” said Combs.