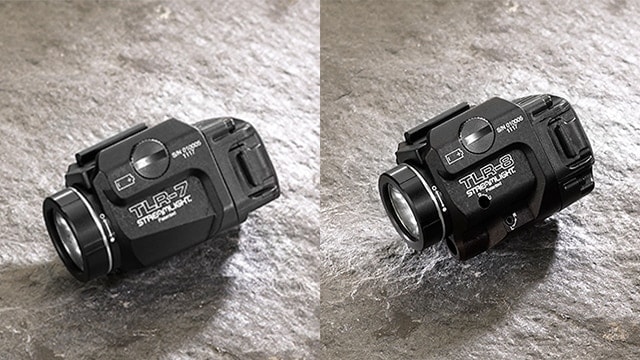 The TLR-7, left, and the TLR-8, right, are the newest weapon mounted lights to hit the Streamlight series. (Photo: Streamlight)

The TLR-7 demonstrates two lighting modes, LED-Only or LED strobe, with each producing a run time of 1.5 hours.

The TLR-8 provides a 640-660nm red laser which increases shooters’ ability to focus on a target. Streamlight says the light can be used in either Laser-Only mode to keep the gun on the target, in LED-Only to give bright light, or in dual mode with both light sources.

Streamlight says the series is constructed from aircraft grade aluminum with black anodized finish and has undergone live-fire testing. The impact-resistant devices are also IPX7-rated up to 1 meter for 30 minutes and can operate in a temperature range of -40 degrees fahrenheit to 120 degrees.

“These super bright new tactical lights are designed to fit a broad array of compact and full- frame weapons, making them effective for a variety of concealed carry and law enforcement uses,” said Streamlight President and Chief Executive Officer Ray Sharrah in a press release.

“Both models provide amazing light for a wide variety of tactical situations, whether for directly illuminating a subject or disorienting a target with the strobe mode. And the TLR-8’s red aiming laser enables users to readily identify a potential threat before taking any action,” he continued.