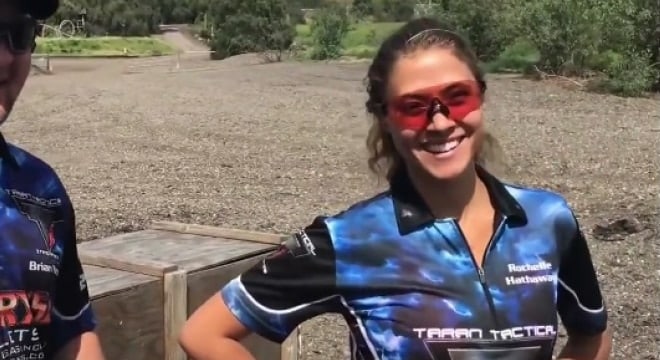 “I think that if there were less guns, there would be less shootings, period. If the government came in and decided to take the guns away, I wouldn’t be mad about it,” said Hathaway. (Photo: Screengrab)

The California-based tactical accessory, gunsmithing and training group publicly distanced themselves from a “friend” of the company following an interview published this week.

Rochelle Hathaway, 28, a self-described flight attendant from California and Hawaii, was interviewed along with several other women by Glamour magazine for a piece entitled, “We asked real women at the world’s biggest gun show: Why do you own a gun?”

The “gun show” in question was the 40th annual Shooting, Hunting, and Outdoor Trade show in Las Vegas and Hathaway, when asked, “What do you say to people who question the value of a private citizen owning a gun?” reportedly told the beauty mag, “I think that if there were less guns, there would be less shootings, period. If the government came in and decided to take the guns away, I wouldn’t be mad about it.”

Photographed wearing a Taran Tactical shirt complete with her name printed on the chest, and appearing in both videos for the company and on their social media pages — since removed — Hathaway told Glamour,  “You don’t need to own a semiautomatic weapon or a silencer.” She then finished up with her feelings on the Second Amendment by saying the Framers didn’t have “AK-47s and everything else in mind [when they imagined] the right to bear arms and protecting yourself.”

Taran Tactical quickly issued a statement saying they have severed professional ties to the “promotional model and friend” and made clear her views were her own.

“While we respect everyone’s right to free speech, Rochelle’s statements were inappropriate and do not represent our company’s vision and beliefs,” said Taran, noted for teaching gun fu to such Hollywood celebrities as Garret Dillahunt and Keanu Reeves in addition to the normal fodder of 3-Gun, USPSA, IDPA, and Steel Challenge training.

“We have and will always support Second Amendment rights, and we will continue to educate and promote the safe, legal ownership and handling of firearms,” said Taran.