Juggernaut representative Robert Griffin holds out the new Precision Rifle in 6.5 Creedmoor at the company’s booth at SHOT Show 2018 in Las Vegas. The rifle had ambidextrous controls and is equipped with Magpul PRS Stock and anti-walking pins. (Photo: Daniel Terrill/Guns.com)

Juggernaut Tactical — one of the few remaining gun makers in the state of California — released a solid new precision rifle chambered in 6.5 Creedmoor that’ll appeal to long range shooters across the country at last week’s SHOT Show in Las Vegas.

When asked for the newest product, Juggernaut representative Robert Griffin grabbed the JTP Precision rifle on the side wall. “Our Precision Rifle, this is the first time that we’ve released this, this is a 6.5 Creedmoor — chambered in 6.5 Creedmoor,” he said before rapid-firing minute details about its features.

“We’re using a Dracos barrel, which is rare for Juggernaut Tactical because we do most of our own barrels in-house, but Dracos — they’re just the best 6.5 Creedmoor barrel that you can possibly get on the market,” said Griffin, who serves as the national accounts manager for the company, before describing what makes the barrel so impressive.

To make the barrels, Dracos press fits an aluminum sleeve around a core to create a cavity and then fills-in the gap with gel that cures over time, Griffin explained and added: “Think of it as an insulator, but it’s a reverse insulator to keep that barrel from getting hot.”

“We took a couple years looking at barrels themselves for our precision rifle and that’s the one that we ended up going with. Like I said, it’s pretty rare for us because all the other barrels that you see, we make,” he said. 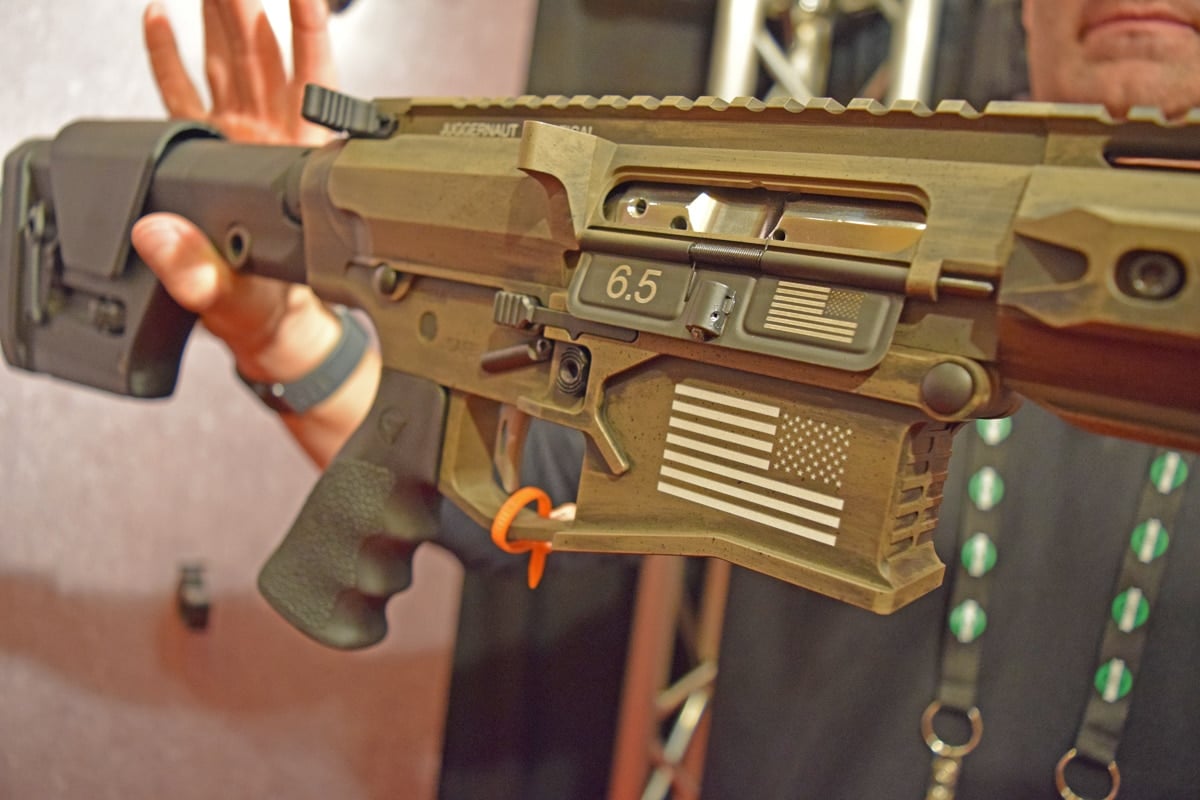 The Juggernaut precision rifle, or JTP, chambered in 6.5 Creedmoor has a faded OD green color and American flags on the side of the mag-well and the inside of the dust cover. (Photo: Daniel Terrill/Guns.com) 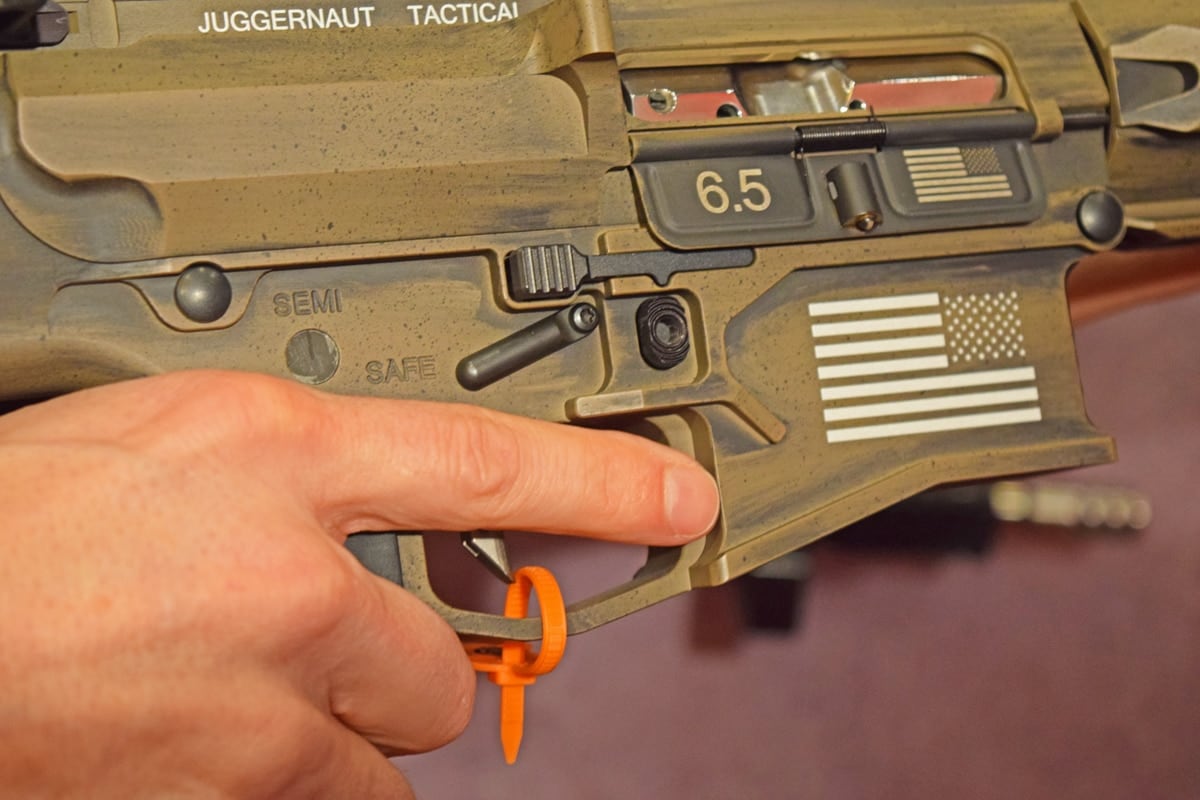 Juggernaut Tactical equips their rifles with “anti-walking pins,” which essentially links together two independent pins with a crossbar. It keeps them from slipping. (Photo: Daniel Terrill/Guns.com)

Glad you asked. The answer is, “no.” The gel will not ooze out of the barrel. It cures. (Photo: Daniel Terrill/Guns.com)

“(Dracos) guarantees their barrels at sub-MOA at ridiculous distances and for a ridiculous amount of time. And we could not make a barrel that was as good as that one, so we used Dracos barrel for our precision rifle,” he said. “It’s a phenomenal barrel.”

The new precision rifle is also equipped with slick new feature that’s now standard on all Juggernaut rifles: the Hellfire ambidextrous charging handle. Griffin called it a “true ambidextrous” charging handle. “If you see other ones that are out there right now, they say that they’re ambidextrous, but this is a true ambi,” Griffin said, adding that with a typical ambi design there’s one side inoperable.

“There’s a master side and a slave side, so unless this one is engaged, this one doesn’t work, because it’s just a slave. It only responds to if this one is being activated,” he said as he pulled back on the charging handle with either hand.

Griffin explained the challenge in re-designing the handle was figuring out how to manipulate the functionality within the receiver. “That was a pain in the ass to figure out how to get that to operate inside there, I’ll be honest. The internal workings of the two cams. It was quite a feat,” he said.

According to Griffin, the new Juggernaut Precision rifle in 6.5 Creedmoor and the Hellfire charging handle will be available at the company’s website. The rifle retails for $3,300 and they’ll ship it to dealers around the country.