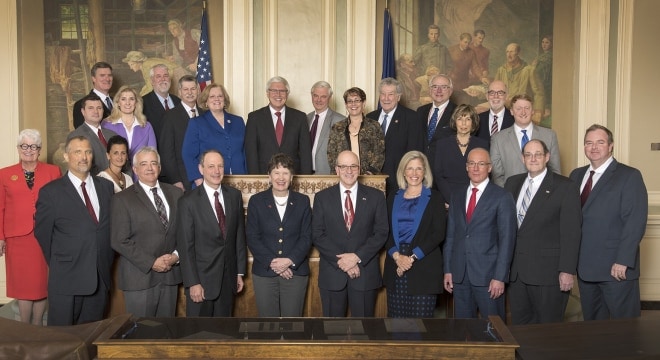 The Republican-controlled Senate on Thursday kicked a bill that would have outlawed bump stocks in the Granite State back down to committee for more study.

The Senate voted 14-9 along party lines to send SB 492, which would make it a misdemeanor to manufacture, sell, possess or use a “multiburst trigger activator” back down to the body’s Judiciary committee, a tactic commonly used to shelve unpopular bills. Opponents say the proposal was too sweeping in context and needed more study.

“For decades it’s been possible to create bump fire with something as simple as a belt loop or a wooden dowel, and attempting to ban a bump stock will not change that fact,” Carson said.

The measure would establish definitions of a multi-burst trigger activator under state law, aimed at bump stocks, and make it a crime to make, own or use them. Violators would be subject to a Class A misdemeanor, which would allow for up to 12 months in jail and a $2,000 fine.

Sponsored by Sen. Jeff Woodburn, a North Country Democrat, the lawmaker said he was glad that lawmakers voted to look into the subject further rather than scuttling the measure altogether.

“I’m very proud that the Senate today voted to study this issue,” Woodburn said. “There was not one vote in the state Senate to defeat the idea that we ought to ban bump stocks, but everyone agreed whether it be for a short-term or a long-term study, that we move forward.”

Gun control advocates took the rebuff on the Senate floor as more of a defeat.

“New Hampshire lawmakers are failing to protect the safety of their communities,” said Nico Bocour, state legislative director of Giffords. “It’s unacceptable that despite the fact that the vast majority of voters agree that bump stocks must be kept out of the hands of dangerous people, the New Hampshire Senate failed to move forward the bump stocks bill.”

Nationwide the push to ban the devices, made controversial overnight after their use in the Route 91 Harvest festival shooting in Las Vegas last October, has been hit and miss. While legislation has been introduced in Congress and a myriad of state legislatures, just two, Massachusetts and New Jersey, have made it into law. The Bureau of Alcohol, Tobacco, Firearms and Explosives recently concluded their public comment period on possible rule changes that could impact bump stocks, receiving 35,000 comments.