With Musk's flamethrowers sold out, Congress floats a ban on the devices 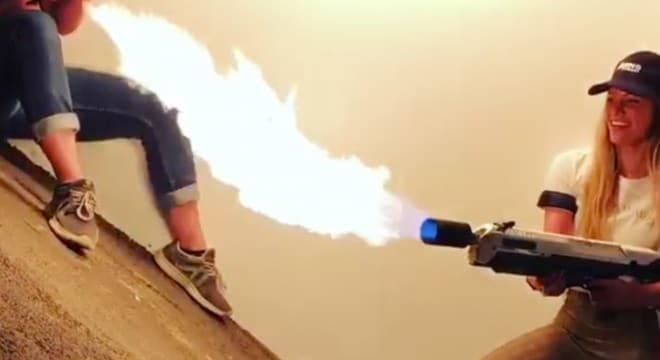 While Musk has taken orders for 20,000 of his flame devices, members of Congress are taking aim at regulating them– though the language of the proposed ban would likely skip over The Boring Company’s new design. (Photo: The Boring Company)

Introduced Tuesday by U.S. Reps. Eliot Engel and Carolyn Maloney, H.R.4901 would add a definition to federal law of a flamethrower and regulate them largely out of existence except for law enforcement users.

The bill was filed the day after Musk’s $500 black and white rifle-like torch device was hyped by the Tesla and SpaceX tech mogul who announced that $5 million worth were sold were sold in the first weekend of preorders. The Boring Company, a tunnel construction company started by Musk in 2016, markets the devices as part of a fundraiser for planned infrastructure projects and is set to sell a limited run of 20,000, which are now sold out.

The proposed legislation would define a flamethrower as any “nonstationary or transportable device designed or intended to ignite and then emit or propel a burning stream of a combustible or flammable substance a distance of at least 6 feet,” which ironically may not include the Boring device. In a video shown with one in Musk’s hands, the flame only appears to waft a couple of feet at most and is never propelled from the, perhaps incorrectly termed, flamethrower.

The fact that Musk’s entry-level torch device does not actually “throw” flame was lampooned by makers of actual civilian flamethrowers such as Ion Productions, whose XM-42M will project a stream at distance.

The Flamethrowers? Really? Act has been referred to the House Subcommittee on Crime, Terrorism, Homeland Security, and Investigations.

An identical version of the legislation introduced last session by Engel never made it out of committee.