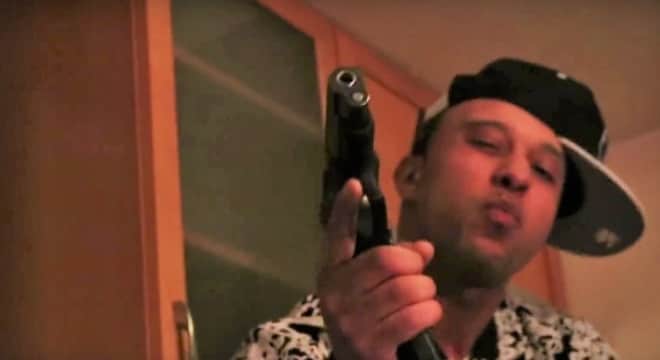 Ricardo Burris, who performs under the name “Nation,” was busted by police just after filming a rap video with a stolen gun used in a shooting two days before (Photo: YouTube screengrab)

A Chicago area felon had a hiccup in his music career after a federal judge handed down his sentence last week, busted in part after he displayed a gun in a music video.

Ricardo Burris, 31, who performs under the name “Nation,” pleaded guilty to one count of illegal possession of a firearm by a felon, and one count of distribution of a controlled substance with the court handing down a 188-month prison sentence last Tuesday.

According to court documents, Burris, who had been arrested more than 50 times, had multiple felonies under his belt and was a prohibited from possessing a firearm under federal law, appeared in a 2016 music video entitled With That during which he displayed at times at least two different handguns.

The day after filming the video, in an altercation with Chicago police, Burris threw away a Springfield Armory XD .45ACP pistol while running from authorities. After recovering the handgun, a trace of the serial number showed that it had been stolen from a licensed gun dealer in Indiana while ballistics tests found that it had been used in a shooting two days before.

Court records show that Burris had a criminal record going back more than a decade including felony drug convictions in 2004, robbery in 2007, and aggravated assault on a police officer in 2012. Further, he was the subject of an active investigation at the time of his arrest, having sold drugs to undercover officers on several occasions in late 2015, and was on bond on armed robbery, domestic battery, narcotics charges.

“First, the defendant shot a rival gang member with the firearm just two days prior to his arrest,” said prosecutors in a sentencing memo to the judge. “The evidence shows that defendant was in the vehicle that participated in the shooting on the day it occurred. The very next day, defendant filmed a music video in which he rapped about shooting rival gang members while holding the firearm he used in the shooting the previous day. Finally, immediately after leaving the filming of the music video, defendant was  arrested with the firearm that matched the shell casings found at the scene of the shooting.”

Seeking leniency, Burris’ attorney said the aspiring rapper came from a dysfunctional family, shared a close bond to his two children, only sold a small amount of narcotics — four grams of crack cocaine and 1.4 grams of heroin — to police, and has an opportunity to learn a trade from his uncle. In the end, the judge in the case went with federal prosecutors’ recommendation of 188 months.

Burris is currently listed as an inmate at the federal Metropolitan Correctional Center, Chicago. As part of his sentence, he would have to complete up to 400 hours of community service and three years probation once released.