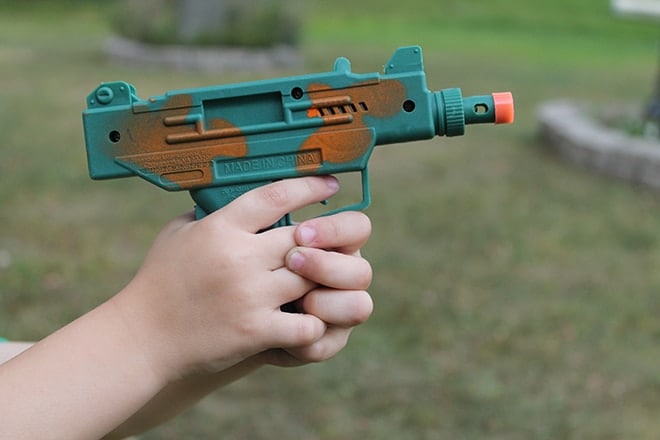 Rob Pincus said he’s noticed a trend among gun owning parents, and it’s not one he’s excited about. The popular firearm instructor who occasionally makes waves within the firearm community for his opinions, explained that parents are turning to toy guns to teach gun safety and this tactic isn’t as harmless as they think.

In a post on social media, Pincus posited that the use of toy and water guns as means to engage in a gun safety talk with kids is often confusing for kids.

“Water pistols are expressly used to shoot water at other people, that’s what kids do with them. Older kids point Nerf guns, air soft and paintball guns at people all the time. Adults point simunitions and training guns at each other all the time,” Pincus told Guns.com. “If you start your kids off with ‘never point anything shaped like a gun at anyone ever,’ you set them and your integrity up for failure.”

Pincus said that for many parents the gun talk starts and ends with just reciting gun rules while toy guns are used to emphasize those rules. But with toy guns and water guns expressly made to be used against others, using them to teach gun safety negates the whole conversation, according to Pincus.

So why do parents continue to use these tactics? Pincus points to convenience as the main factor pushing parents towards the use of Nerf and other toy guns. He explained that taking kids to an actual range that is is kid friendly can be a bit of challenge, so many parents turn to toys as a means to supplement the real deal.

“Getting kids onto a range, getting safety glasses and hearing protection that fit, being in an environment that is kid friendly — how high are the tables, how loud is the gun in the next stall — being in a situation where you can really talk and teach without disruption or interference from others. If you don’t live out in the country where you can shoot on your own land, it can be cumbersome,” Pincus commented.

He added, “(Toys) are zero risk and I think it feels good to be doing something.”

Though teaching gun safety can be an arduous task, experts agree that it is a necessity. A study published in October 2017 in the journal Pediatrics reported that an average of 5,790 children in the U.S. are seen in the emergency room every year for gun-related injuries. Around 21-percent of those are unintentional. The study also revealed that on average 1,297 children die each year from gun-related injuries, making guns the third leading cause of death in American children.

The gun industry has been a proponent of gun education initiatives, encouraging safe gun storage and handling while also offering resources to help parents teach gun safety. Pincus, alongside other instructors and educators, say parents should par down gun safety briefings to appropriate age levels ensuring that children know what to do if they come into contact with a firearm.

For his part, Pincus said it’s important that parents understand there’s a difference between teaching children about general gun related concepts and teaching them responsible use of firearms. Strength, coordination, and physical abilities are just some of the factors that will drive the style of conversation and different learning levels.

“Parents should be able to determine the appropriate age at which to introduce different levels of gun safety and responsibility. The trick is not to try to oversimplify it,” Pincus said. “Guns, like fire, scissors and prescription pills are a tricky parenting issue. They are going to be in the children’s’ worlds, they can be dangerous and they are a valuable part of life when used properly.”