Gun sales down in January

Estimated gun sales fell 8 percent in January, according to an analysis of FBI data published this week.

Estimated gun sales — the sum total of transfers in the NICS’s handgun, long gun, multiple and other categories — exceeded 955,000, an 8 percent decline over last year and the slowest January recorded since 2012.

Background checks serve as a proxy measure for gun sales, however, the measurement isn’t perfect. Applications for concealed carry permits, periodic rechecks for maintaining licenses and a slew of smaller categories for pawns,  redemptions, rentals and other rare situations undercut the total amount of checks processed in one month.

These types of background checks have consumed larger percentages of the total amount recorded each month since the banner year of 2016, federal data shows.

Maksim Netrebov, founder of New Jersey-based Maks Financial Services and contributor at Seeking Alpha, said this reality leads to some optimistic interpretations of the “true health” of the firearms industry. He notes the adjusted background check figure trails January 2016 by more than 31 percent. 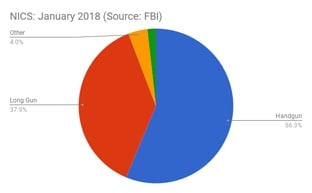 “The biggest drop year over year is in handgun checks, further cementing that it is a drop in new shooters who will more often than not, start their firearms purchases with handguns,” he said.