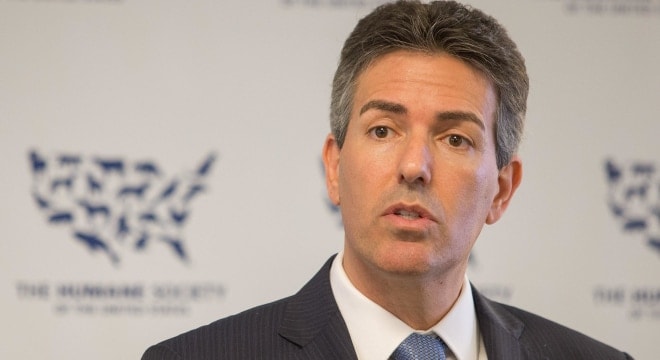 Long a facet of anti-hunting legislation and activism, the Humane Society of the U.S. has replaced their familiar CEO but promises to steer the same course as in the past.

Out at HSUS is Wayne Pacelle, who served as the organization’s president and CEO since 2004. Pacelle resigned from the organization last week amid sexual harassment allegations that saw several board members quit the group.

“The last few days have been very hard for our entire family of staff and supporters,” said Rick Bernthal, Chairman of the Board of The HSUS.  “We are profoundly grateful for Wayne’s unparalleled level of accomplishments and service to the cause of animal protection and welfare.”

One of the nation’s largest anti-hunting group, HSUS chipped in more than $600,000 in funds to support their picks among ballot measures and political candidates in the last election cycle. Though avowedly a nonpartisan organization, the group has in the past campaigned against the use of traditional ammunition on public lands, pressured airlines to stop flying legally taken trophies back from overseas and attacked bear hunting in Florida and Maine while being criticized in turn by gun rights groups for doing little to help pet shelters.

According to the group’s 2015 federal tax disclosure, the latest available, Pacelle, the organization’s highest paid officer, received $448,980 in total compensation. As a whole, the group brought in $126 million in contributions and grants.

Replacing Pacelle is Kitty Block, who has been with the organization since 1992 and formerly served as president of group’s international arm, Humane Society International. Block said in a video statement the HSUS will “remain the leader in fighting for all animals.”