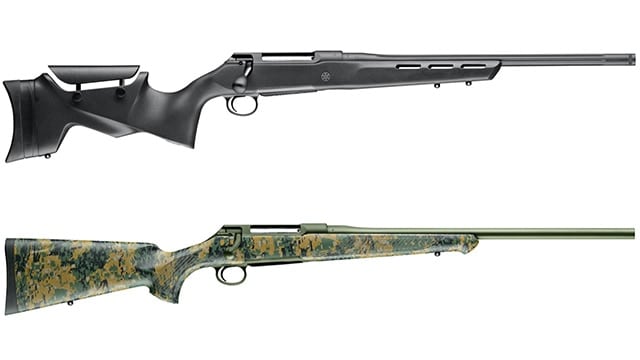 Distributed by Blaser, the entry level long guns give shooters more options to suit their needs on the range and in the field. Meshing affordability with performance, according to Sauer, the rifles boast a crisp, single-stage trigger, three-position safety and cold-hammer forged Sauer barrel. Designed for accuracy, Sauer says the new models churn out a five-shot sub-MOA performance.

The five configurations each tout a unique style and features with the S100 Ceratech kicking off the new models. The S100 Ceratech features a Cerakote film for durability and ruggedness. The S100 Pantera pairs an ergonomic stock with a heavy fluted barrel and adjustable comb for long range adventures. The S100 Fieldshoot is a match-quality gun that uses the Pantera’s stock without the coating and with a heavier match grade barrel. The S100 Cherokee is crafted with a synthetic digi-camo stock with tundra green cerakoted barrel and action. Rounding out the series is the S100 Atacama which utilizes a desert sand caerakoted barrel and action.

Available in a wide variety of calibers, the new S100 models start at $799.