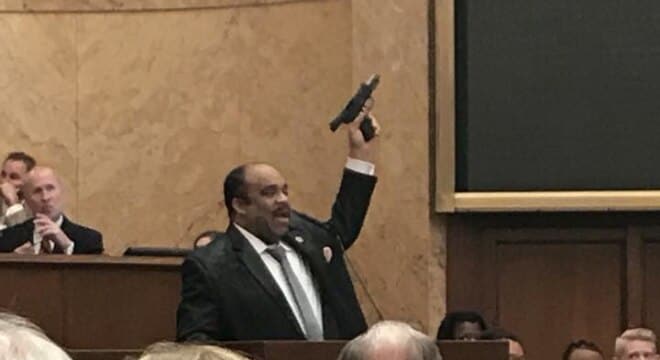 A Mississippi lawmaker held up his handgun and concealed carry permit Thursday after a controversial bill to strengthen gun carry rights in the state advanced in the House.

Rep. Charles Young Jr., D-Meridian, displayed first his permit and then his unloaded FN pistol at the speaking podium while stumping to halt a bill the body had overwhelmingly approved Wednesday, The Jackson Clarion-Ledger reported. Young debated with House Speaker Philip Gunn, then requested the unarmed sergeant-at-arms to escort him away without further incident.

Young told reporters afterward he was “very much against” guns in the state Capitol or schools and brought the gun as a protest against HB 1083, which cleared the body in an easy 80-29 vote earlier in the week. The measure tweaks the laws concerning Mississippi’s enhanced carry permit by setting up a process for carriers to challenge state agencies, such as at the Capitol or public university campuses, that have barred permit holders.

While the laws of the Magnolia State allow for permitless carry, the Mississippi State Highway Patrol continues to issue carry permits. Permit holders who take an optional eight-hour training class get an enhancement that allows them to ignore many posted gun free zones. However, some state entities have moved to expand those zones and in turn, ignore those permit holders with the enhancement.

Two years ago, though campus carry is legal in the state, public universities to include such large schools as Mississippi State and Ole Miss, instituted policies to prohibit guns, even those carried by enhanced carry permit holders, in specific non-public campus areas, a ban that is in jeopardy if HB 1083 becomes law. Armed with a letter from Southeastern Conference Commissioner Greg Sankey voicing concerns about the potential loss of SEC sporting events should legal guns make further inroads on campus, school officials are firmly against the bill.

”I believe that a majority of the parents of the outstanding young people we are entrusted with educating and nurturing share my concerns about the passage of this bill and with it the introduction of firearms into our classrooms and our residence halls,” said MSU President Mark E. Keenum in opposition to the legislation.

The measure, supported by the National Rifle Association, is now headed to the GOP-controlled state Senate. Approval there would place it on the desk of pro-gun Gov. Phil Bryant, who has signed a succession of Second Amendment protections into law.