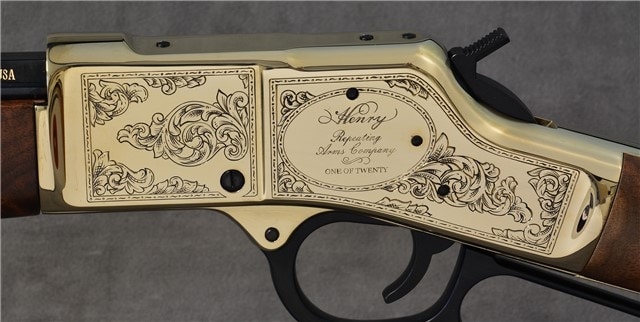 Henry Repeating Arms continues its celebrating of its 20th anniversary by auctioning off a Henry Big Boy .44 Magnum “One of Twenty” Edition rifle with proceeds benefiting USA Shooting.

The “One of Twenty” long gun touts hand-engraving, AAA-grade American Walnut and a special “One of Twenty” serial number. The special edition rifle also comes in a presentation Walnut Display Case.

The “One of Twenty” Big Boys series has been donated by Henry to organizations within the shooting industry that help fund initiatives related to hunting and the shooting sports.

The “One of Twenty” rifle proceeds will benefit USA Shooting. (Photo: Gunbroker)

Henry Repeating Arms says the proceeds from this Gunbroker auction will go to support USA Shooting and its endeavors to prepare athletes for Olympic and Paralympic games. President and owner of Henry Repeating Arms, Anthony Imperato, said the company proudly backs organizations that have a positive impact on the shooting sports.

“The incredible, positive impact that these organizations have had on the shooting sports industry is immeasurable and we’re proud to have the opportunity to help fund their work for years to come,” said Imperato. “Collectors and Henry enthusiasts alike will be drawn to the intricate, hand-engraved details these rifles will feature, along with their extraordinary AAA grade American Walnut and special ‘One of Twenty’ Edition serial numbers.”

The Gunbroker auction ends on Feb. 18. The current bid at the time of this writing was $1,825.