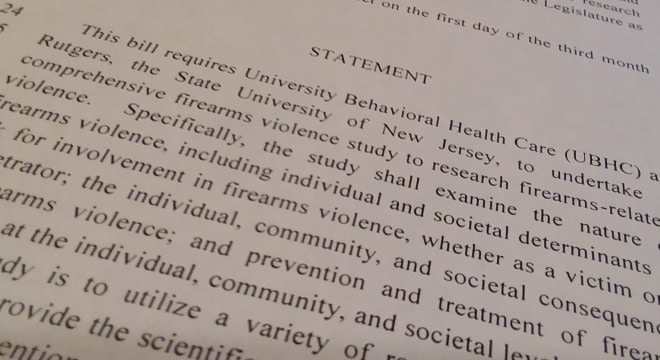 The bill would give $400,000 in public funds to Rutgers’ University Behavioral Health Care and the School of Criminal Justice to study the nature of firearms violence while working with lawmakers and state agencies on policy. (Photo: Chris Eger/Guns.com)

A New Jersey Senate Committee on Thursday approved a measure that would pay Rutgers University to undertake an extensive study to examine firearms-related violence.

The bill, S 63, would go so far as look at “firearms violence as a form of terrorism” as researchers delve into the subject on both individual and societal levels. The sponsor of the bill, which passed the Senate Law and Public Safety Committee 4-1 this week, says it is needed to take the place of federal research.

“For too long, the CDC [Centers for Disease Control] has been banned from researching gun violence as a public health issue,” said state Sen. Troy Singleton, D-Burlington, in a statement  “Yet, 89 people die every day across our nation due to firearms. If this isn’t a public health issue – or even a public health emergency – then I don’t know what is. If the federal government won’t allow this research to occur, then we will take the matter into our own hands.”

Singleton’s measure would allocate $400,000 in public funds to Rutgers’ University Behavioral Health Care and the School of Criminal Justice to study the nature of firearms violence from the perspective of the victim and perpetrator as well as larger community and societal consequences. Researchers would work with lawmakers and state agencies on an ongoing basis to identify what the bill characterizes as “violence prevention policies and programs.”

Singleton argued the Dickey Amendment shortcut federal funding for gun research study as a health care issue. Named for former U.S. House Rep. Jay Dickey, an Arkansas Republican who backed the measure in 1996, the amendment stripped the CDC of $2.6 million it had been using on its gun violence research and has been a contentious matter ever since. Those in support of the amendment say the CDC is only barred from gun control advocacy, and point to an Obama-era study done by the agency that found defensive gun use was common, mass shootings were not, and most gun deaths in the country are due to suicide.

Citing the Dickey Amendment, California established its own research center at the University of California to study gun violence as a health care issue in 2016, while lawmakers in New York are moving forward with a similar plan.

“The legislation is a transparent attempt to create an anti-gun think tank cloaked in the legitimacy of academia,” said an alert from the Association of New Jersey Rifle & Pistol Clubs on Singleton’s bill. “Anti-gun billionaires already spend millions on ‘research’ by private anti-gun foundations, but apparently some lawmakers will not be satisfied until New Jersey’s already-overburdened taxpayers are forced to fund the very efforts to undermine their rights.”

The measure now heads to the Senate Budget and Appropriations Committee for further consideration. A similar bill stalled in the chamber last session.