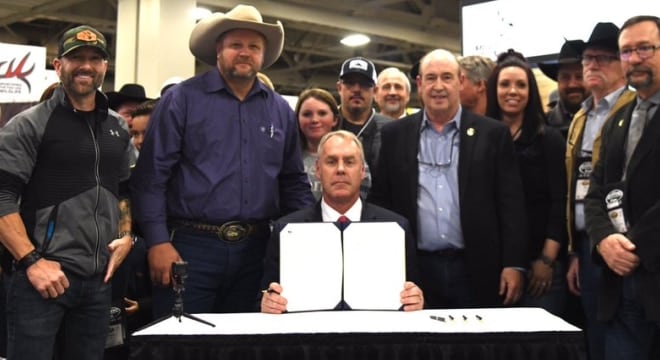 Secretary of the Interior Ryan Zinke last week signed a measure designed to up the health of Western big game herds with hunters in mind (Photo: Department of Interior)

Before a crowd at the Western Hunting and Conservation Expo in Utah last week, U.S. Interior Secretary Ryan Zinke signed an order to protect range routes for antelope, elk and mule deer.

The annual expo, sponsored by Sportsmen for Fish and Wildlife and the Mule Deer Foundation, saw Zinke ink Secretarial Order 3362 designed to improve habitat for big game in Western states along their winter range and migration corridors. Zinke said the action aims to make herds healthier for the benefit of hunters and wildlife watchers.

“American hunters are the backbone of big game conservation efforts, and now working with state and private landowners, the Department will leverage its land management and scientific expertise to both study the migration habits of wildlife as well as identify ways to improve the habitat,” Zinke said in a statement.

The order mandates that numerous federal agencies under Interior, such as the Bureau of Land Management, National Park Service, and Fish & Wildlife Service work with state conservation agencies to improve habitat for the iconic big game animals with priority given to 11 Western states.

“For example, this can be done by working with ranchers to modify their fences, working with states to collaborate on sage brush restoration, or working with scientists to better understand migration routes,” Zinke said.

The news was welcomed by sportsmen’s groups such as the Mule Deer Foundation and Rocky Mountain Elk Foundation, as well as the National Rifle Association who stressed Zinke was “taking steps to protect healthy wildlife populations and recognize that sportsmen are an integral part of modern natural resource management.”

Since his Senate confirmation last year, Zinke has made a number of decisions impacting hunting, including repealing a ban on the use of lead ammo on public lands — a move opposed by the Humane Society of the U.S. — announcing a proposal to expand hunting at 10 national wildlife refuges, designating August as National Shooting Sports Month, and ordering a management plan to expand hunting, fishing and increase outdoor recreation opportunities on federal lands.