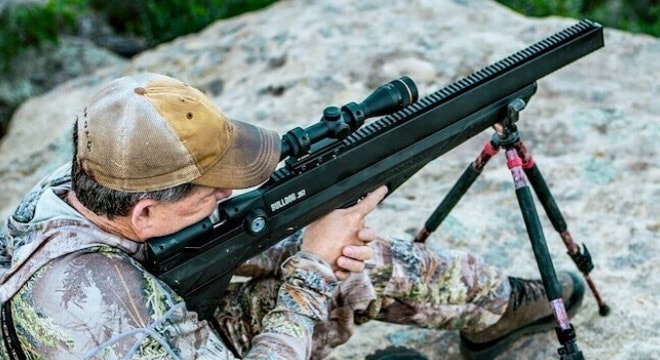 Florida is moving forward with a plan to allow hunting with big bore PCP air guns, such as the .357-caliber Benjamin Bulldog shown here. (Photo: Crosman)

The draft rule, amended with input from hunting management officials, will allow the use of .30 caliber and above PCP guns for deer and .20 caliber or larger for turkey. FWC Commissioners said the move lets Florida join a number of other states that allow the use of large-caliber PCP guns for sportsmen to take larger game.

“Recent innovations in technology have led to specific types of air guns that have sufficient range and power to take big game,” the commissioners said in a presentation on the changes. “Currently, eight states allow airguns to be used to take deer and four states allow them to take turkey.

“Over the past decade, as powerful air guns have become more affordable and commercially available, the public’s interest in using them to take big game has grown. As a result, we are proposing to allow the use of pre-charged pneumatic air guns for hunting deer and turkey on public and private lands,” they continued.

Large domestic PCP gun makers such as Crosman, who market the .357 caliber Benjamin Bulldog and the Benjamin Pioneer Airbow, said they are actively working with states to sell them on the advantages of big bore airgun hunting

“We are very pleased to learn the state of Florida has approved the Benjamin Pioneer Airbow and big bore airguns for use in the general firearms season for big game like deer and turkey,” said Jay Duncan, director of marketing for Crosman. “Air-powered weapons will provide expanded opportunities for hunters across the state to ethically harvest game.”

Previously in Florida, airguns have only been authorized for taking gray squirrel, rabbit, furbearers or wild hogs.