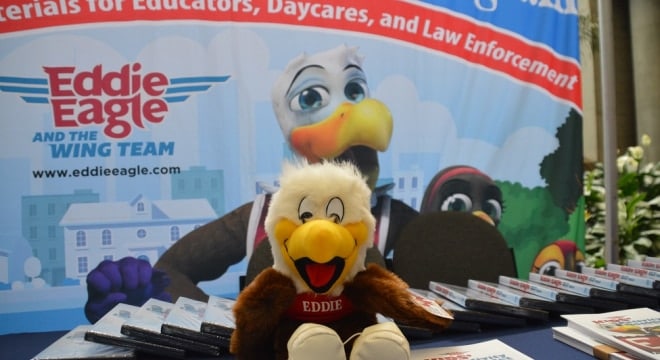 According to the NRA, the Eddie Eagle program started in 1988 and has taught over 29 million youth the basics of firearm accident prevention (Photo: Chris Eger/Guns.com)

A House bill heard in committee last week to standardize gun safety education in Kansas schools would draw in large part from a program organized by the National Rifle Association.

The measure, HB 2460, would base firearm education programs in elementary and middle schools on the NRA’s Eddie Eagle Gunsafe initiative. The sponsor of the legislation, state Rep. John Whitmer, R-Wichita, says the NRA’s program, which teaches kids who encounter a firearm not to touch it, leave the area and tell an adult, sends a good message.

“It’s a great program, out Eddie Eagle bill,” said Whitmer shortly after the proposal’s first hearing in the Committee on Federal and State Affairs.

The hearing, as reported by the Topeka Capital-Journal, drew some pushback from the Kansas Association of School Boards who argued curriculum decisions should be done by local school boards, and from a Kansas City Democrat, state Rep. Louis Ruiz, who called the move an “overreach.”

Under Whitmer’s bill, which would cost an estimated $2,500 for starters, youth through the eighth grade who receive gun safety training would draw from the Eddie Eagle program while older students would take optional hunter’s education courses developed by the Kansas Department of Wildlife, Parks and Tourism. The state-run hunter’s safety course is already being taught at no cost in 63 schools.

The measure has the support of the conservation agency, the Kansas State Rifle Association and the NRA.

According to the gun rights organization, the program started in 1988 and has taught over 29 million youth in all 50 states, Canada and Puerto Rico, the basics of firearm accident prevention. Recently revamped, the group contends it is not about marketing guns to kids, just safety.

“Neither Eddie nor any members of his Wing Team are ever shown touching a firearm, and there is no promotion of firearm ownership or use,” the program’s website says. “The NRA does not make any sort of profit off the program, nor does it intend to.”

The Kansas proposal is not the first of its type. Eddie’s mandatory use was proposed for a gun safety program in Louisiana in 2015, however, in order to pass lawmakers stripped the arbitrary language and made the education optional, allowing educators to draw from other resources. Besides Louisiana, Utah and other states have moved to establish firearm safety programs in public schools.

Whitmer says his bill is set to come up in committee Thursday.