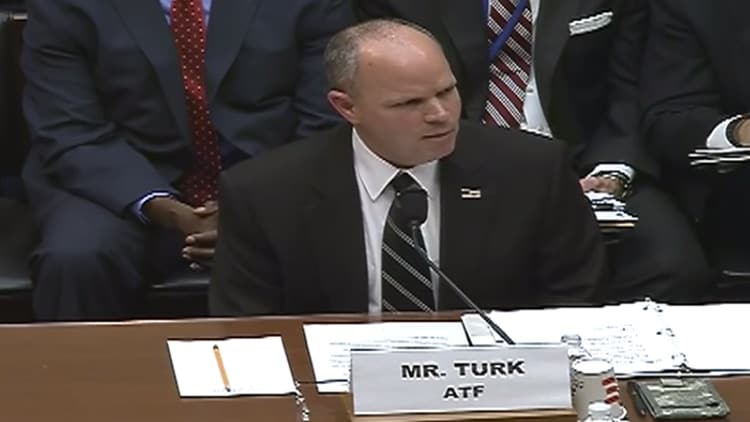 A gun control organization backed by former New York Mayor Micheal Bloomberg is calling for the job of the Bureau of Alcohol, Tobacco, Firearms and Explosives employee who authored a paper seen as favorable to gun rights.

Everytown, based on information released by the Brady Campaign this week, said that Ronald B. Turk, ATF’s associate deputy director and chief operating officer, should step down because he communicated with a firearms industry lobbyist before compiling his 11-page “white paper” advocating relaxed gun policies.

“The ATF official who wrote this memo should resign, and the administration should be ashamed for doing the gun lobby’s bidding to weaken America’s gun laws,” said Kate Folmar, communications director for Everytown.

The Brady’s information, garnered after a federal lawsuit over unfilled Freedom of Information Act requests, shows communication between lobbyist Mark Barnes, and Turk. Barnes, a facet of Congressional lobbying going back more than a decade, has been registered to represent various gun rights groups to include the Citizens Committee for the Right to Keep and Bear Arms and National Rifle Association (in 2014 only), as well as several gun manufacturers, importers, collectors groups, and a gun show organization.

“If I am missing the mark on a major issue or disregarding a major discussion point any feedback you have would be appreciated,” Turk reportedly wrote Barnes. “My hope is that the agency can demonstrate flexibility where appropriate and identify areas for further discussion, recognizing that solving everyone’s concerns on each side would be difficult.”

Obtained by the Washington Post last January just after the inauguration of President Trump, the paper Turk created advocates removing restrictions on the sale of suppressors; conducting a study concerned with lifting the ban on some imported weapons; and requiring a higher amount of crime guns to be traced back to specific dealers before the federal government asks for additional information from those dealers.

“The ATF has a crucial role in monitoring the gun industry and doing what it can to keep us safe from gun violence,” said Brady lawyer Mariel Goetz. “The American public deserves to know what its government is doing to protect them, and what role outside groups have in influencing policies developed by agencies like the ATF.”

While the gun control groups are set to pillory Turk over his communication with the lobbyist, it should be noted that the NRA, among others, has a long and unsurprising history of weighing in officially on past rule determinations proposed by the regulatory agency and has publicly called on ATF to review policies.

ATF also works closely with members of the gun industry. For instance, they cooperate with the National Shooting Sports Foundation in a matching reward program for information used in the aftermath of gun store thefts, collaborate on a joint effort to protect federal firearms licensees from loss, and back an initiative with the industry to curb straw purchases by those who are ineligible to possess firearms.

On the flipside, gun control advocates have in the past cozied up to ATF when it could suit their agenda, supporting divisive policies and leadership before and after key Congressional votes such as in the case of promoting B. Todd Jones to fill the position of ATF director in 2013. Jones, who inherited the agency during the Obama administration in the immediate aftermath of the Fast and Furious gun-walking scandal which gave it a lingering black eye, later went on to become a member of Giffords, along with at least one former ATF career employee.