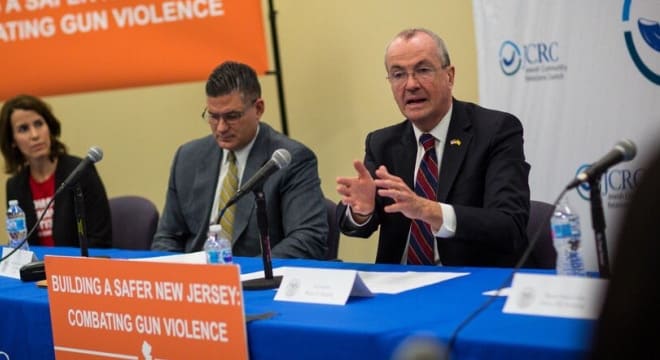 Democrat Phil Murphy, New Jersey’s new governor, made it clear this week he is onboard with turning a number of gun control proposals into the Garden State’s newest gun control laws.

Murphy, elected on a platform that included “getting tough” on guns, gathered with like-minded advocates at the Betty and Milton Katz Jewish Community Center in Cherry Hill to talk about “combatting gun violence” through a series of bills pending in the legislature to expand background checks, make it harder to get a carry permit and ban a variety of ammunition, guns and devices. Murphy acknowledged that the proposals likely would have been rejected by former Gov. Chris Christie.

“Together, we can pass gun safety laws that have been vetoed in the past and reclaim our place as a state that acts on facts and common sense,” Murphy said in a statement. “We must again become a state that values the safety of our residents and communities over the misguided priorities of the gun lobby.”

Among the legislative package supported by Murphy is A2757, which would require background checks on private gun sales; A2758, which curbs past moves by Christie to make it easier to get a carry permit; A2759, to ban “armor-piercing” ammunition; A2760, to ban .50-caliber rifles; and A2761 to limit gun magazine capacity to 10 rounds.

The agenda is backed by anti-gun advocates including Ceasefire NJ, the Brady Campaign, Giffords and Moms Demand Action, members of which were on-hand for the event.

Gun rights groups, to include the Association of New Jersey Rifle & Pistol Clubs and the New Jersey Second Amendment Society, who have warned against Murphy’s move into the Governor’s office, say the “storm is here” in the push by opponents for more regulation on firearms in the state. Scott Bach, ANJRPC’s executive director, said the fact the roundtable event did not include representation from pro-gun groups, showed Murphy already has his mind made up.

“How can they call it a ’round table’ when there was no one to speak for NJ’s one million law-abiding gun owners,” said Bach. “They always talk about wanting to have a ‘conversation’ about gun issues – this was more like a monologue. They need to focus on severely punishing violent gun criminals instead of banning tools needed by honest citizens to defend themselves.”

I will be an entirely different type of governor. New Jersey can, and must, be a national role model in changing this critical debate.