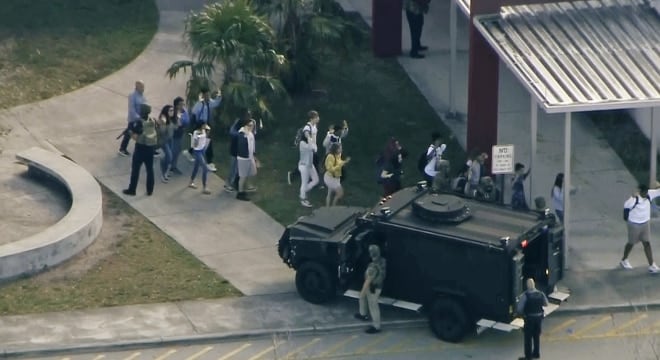 A shooting at Stoneman Douglas High School in Parkland, Florida this week left 17 dead and sparked a round of calls for more gun control. (Photo: Screengrab via NBC News)

Within hours of the news of a tragic shooting in Florida on Wednesday, Democrat lawmakers and gun control groups began circulating statements calling for action.

The mass shooting at Stoneman Douglas High School in Broward County’s Parkland community left at least 17 dead and a 19-year-old suspect in police custody. As the event crowded out the Olympics and political drama from the national news cycle, both politicians and those in favor of more regulation on guns alike blamed Congressional inaction for the event.

In the Senate, Connecticut’s Chris Murphy took to the chamber floor as the details in Florida unfolded and characterized it to fellow lawmakers as “an epidemic of mass slaughter” that was a “consequence of our inaction.” Kamala Harris, elected to replace former California gun control icon Barbara Boxer in 2016, tweeted that, “We must address gun violence.”

Elsewhere on Capitol Hill, the House saw its own group of Democrats, such as New York’s U.S. Rep. Yvette Clarke, say, “It’s time for sensible gun control. Our kids deserve much better,” a comment echoed by California Dem Adam Schiff.

From Sacramento, California Lt. Gov. Gavin Newsom issued his own statement under the hashtag #GunControlNow, then trolled President Trump and other prominent Republicans on social media.

Gun control organs big and small released passionate statements, announced rallies, quickly asked for donations to “end gun violence in America” and, in the case of the Newtown Action Alliance, circulated a petition to ban “assault weapons and high-capacity magazines” referring to them as “weapons of war.”

Although the federal assault weapon ban sunset in 2004, at least seven states have passed their own blanket prohibitions while local bans exist in the District of Columbia and parts of Illinois. However many contend the original assault weapon ban was ineffective at the same time opinion polls found little appetite for a return of such prohibitions. That has not dissuaded minority Dems in both Florida and in Washington from attempting to resurrect a ban in recent months.