FBI: No terrorism suspected in NSA shooting at Fort Meade 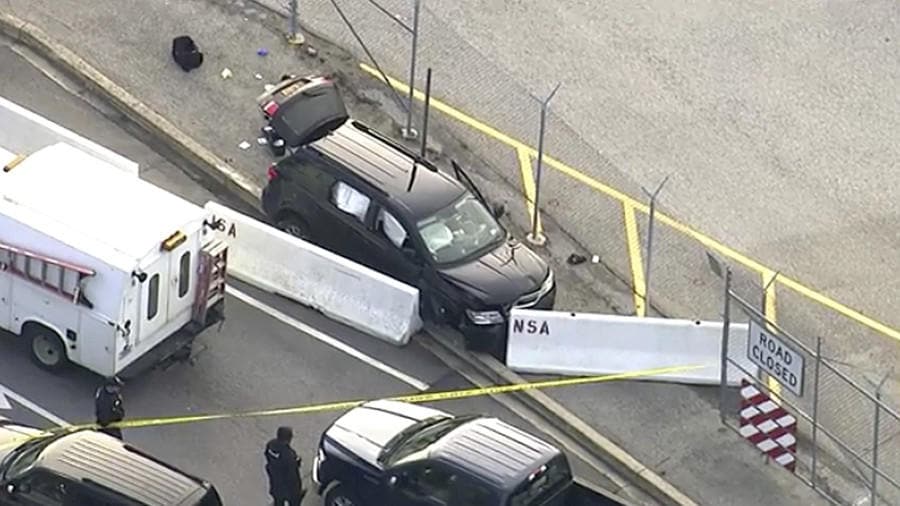 In this image made from video and provided by WUSA TV-9, authorities investigate the scene of a shooting at Fort Meade, Md. on Wednesday, Feb. 14, 2018. (Photo: AP)

The FBI doesn’t believe terrorism played any role in a shooting at the National Security Administration campus at Maryland’s Fort Meade, an agency spokesperson said Wednesday.

“We do not believe there is any nexus to terrorism at this point in time, and believe that this was an isolated incident,” Gordon Johnson, special agent in charge at the FBI’s Baltimore Field Division office, told reporters. “We ask for your patience as the investigation continues.”

Federal investigators said three men riding in a black SUV with New York tags tried to breach an NSA security gate around 6:55 a.m. Wednesday. The vehicle crashed into a concrete barrier after officers opened fire. An officer, a nearby civilian and one of the suspects were wounded and hospitalized.

“At this point we don’t believe any of the injuries were the result of gunfire,” Johnson said, noting the civilian and officer sustained non-life-threatening injuries. The suspect’s condition remains unknown.

Video footage captured by NBC 4 Washington shows the SUV’s windshield cracked and dotted with bullet holes. Authorities shut down a state highway around the gate for two hours Wednesday morning while investigators cleared the scene.

Johnson said all three suspect are in police custody and the FBI’s investigation is ongoing. “We are conducting interviews, trying to talk to them, figure out why they were here,” he said.

The White House released a statement Wednesday afternoon, hours after an administration spokesperson said the president had been briefed on the situation.

“Our thoughts and prayers are with everyone that has been affected,” the statement said. “We will continue to provide updates as they become available.”

It’s not the first time gunfire has erupted at the NSA security gate, the Associated Press reports. A Baltimore man died and a second was wounded after ignoring commands from law enforcement to leave the NSA campus in March 2015. The men, riding in a stolen Ford Explorer, rammed the vehicle into a police car during the incident.