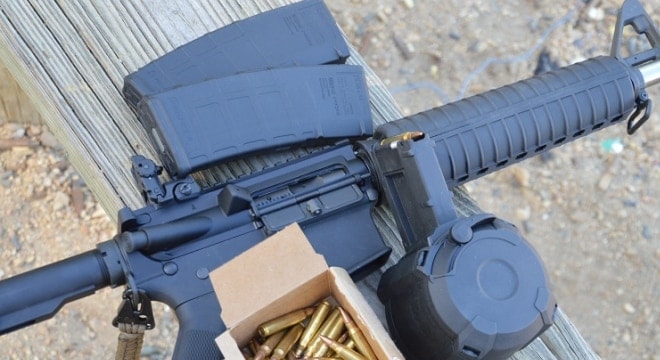 Democrats along with an anti-gun group are pushing for a series of bans on popular guns and magazines coupled with new gun free zones. (Photo: Chris Eger/Guns.com)

Lawmakers in the nation’s smallest state are planning a large package of bills in conjunction with gun control activists that could see bans on certain types of semi-automatics and their magazines.

Allied with the Rhode Island Coalition Against Gun Violence, Sen. Joshua Miller, D-Cranston, and Rep. Jason Knight, D-Barrington, are introducing proposals in both chambers of the legislature that would add the same types of firearms restrictions seen in neighboring Connecticut and Massachusetts. Knight argued the move is needed to protect public safety in the aftermath of a high-profile school shooting in Florida this week.

“It will take a multi-pronged strategy that includes banning the sale and ownership of assault weapons,” Knight said. “There (sic) purpose goes far beyond defense of self and home. There is no place for them in civil society.”

The measures, part of the local gun control group’s longstanding legislative agenda, aims to not only go after some types of semi-auto firearms currently legal in the state but also, through a measure sponsored by state Sen. Gayle Goldin, D-Providence, any detachable magazine capable of holding more than 10 rounds.

Goldin’s bill has no provision for grandfathering targeted magazines already in circulation, leaving owners to sell them to a gun dealer, hand them over to police, or move them out of the state.

“High-capacity magazines turn already powerful guns into weapons whose sole purpose is to incur multiple deaths and injuries as quickly as possible,” said Goldin. “They are illegal for hunting, and they are unnecessary for protection. They are a tool that enables mass shooters to carry out their heinous acts, leaving countless victims dead every year, and there’s no valid reason to allow their use and sale here in Rhode Island.”

While shootings do occur in the state, especially in some urban areas, according to the FBI rifle use in murders across Rhode Island is rare. As detailed in statistics from the agency, of Rhode Island’s 29 homicides in 2016 for which the weapons used were, none were attributed to rifles of any sort– although nine were accomplished with knives. Likewise, there were no homicides in the state chalked up to rifles in 2015, 2014, 2013, or 2012, the furthest researched by Guns.com for this piece.

In addition to the bans, the package also includes a measure to put schools in the state off-limits for those who are carrying otherwise legal concealed handguns, with exceptions for law enforcement.