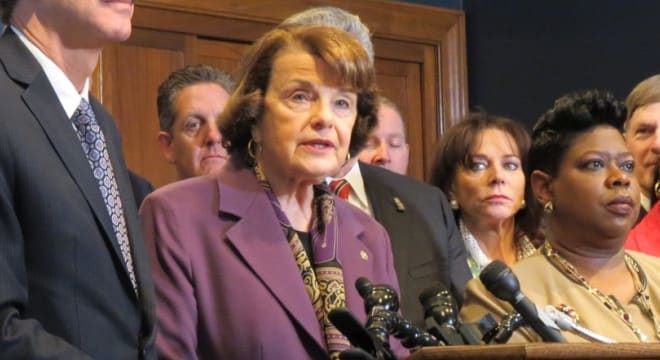 “If you can’t buy a handgun or a bottle of beer, you shouldn’t be able to buy an AR-15,” said the Senator in her campaign to end not just AR-15 but all rifle sales to those under 21. (Photo: Sen Dianne Feinstein’s office)

The senior lawmaker among California’s all-Democrat delegation to the U.S. Senate wants to ban rifle sales to those between the ages of 18 and 21 years old.

In a statement released Friday, U.S. Dianne Feinstein announced she planned to introduce legislation on Capitol Hill to push the minimum purchase age for a rifle to 21. The move comes the same week that a 19-year-old man in Florida used a legally-owned rifle to kill 17 at the Marjory Stoneman Douglas High School in Parkland, Florida.

“Under current law, licensed gun dealers cannot sell a handgun to anyone under 21, but they are allowed to sell assault rifles like the AR-15 to anyone over 18. This policy is dangerous and makes absolutely no sense,” Feinstein said. “If you can’t buy a handgun or a bottle of beer, you shouldn’t be able to buy an AR-15.”

The proposal would move the threshold age for legal rifle purchases to 21, the bar set for modern pistols and revolvers under the Gun Control Act of 1968. Currently, in the U.S., 18 is seen as the age of adulthood by most factors, including entering the military without a parent’s waiver, registering to vote, buying cigarettes and getting married. Until 1984, it was legal to drink at age 18 in many states, a factor that only changed after legislation was enacted to penalize states who did not voluntarily raise the minimum drinking age to 21 by threatening to carve out federal road funds.

The longtime gun control stalwart who authored the controversial federal assault weapon ban in 1994, Feinstein also wants to reboot that ban and add bump stocks to the list of items regulated out of existence.

An assault weapons ban was in place for 10 years. Republicans allowed it to expire and we’ve been fighting to get it reinstated ever since. Military-style weapons are slaughtering our children and it’s got to stop. #GunReformNow