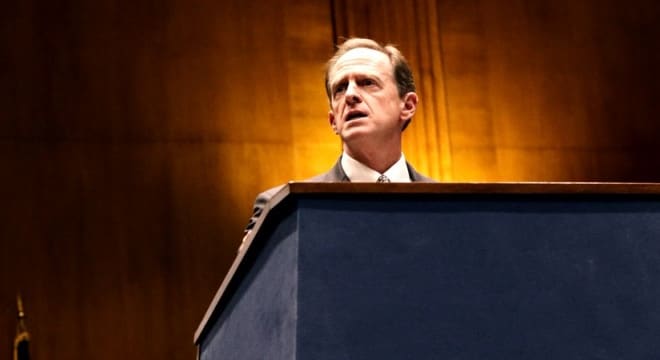 The Toomey half of 2013’s failed Manchin-Toomey background check bill is shopping for supporters to assist in another try (Photo: Sen. Toomey’s office)

The day after a high-profile school shooting in Parkland, Florida, Toomey took to social media to say he was “committed to improving our federal background check system” and that he was reaching out to lawmakers on both sides of the aisle to “see where progress can be made.”

Two days later, Toomey’s Pennsylvania state director, Robert DeSousa, told those at a chamber of commerce legislative breakfast in Lewisburg that the lawmaker was ready to reintroduce his past, failed background check expansion.

First floated in the aftermath of the 2012 Sandy Hook school shooting in Newtown, Connecticut, Toomey joined with West Virginia Democrat Joe Manchin to back an amendment to Harry Reid’s Safe Communities, Safe Schools Act which would have expanded background checks to include private gun sales and transfers. With gun rights groups opposed and few members of the GOP ready to defect and support the measure, it tanked 54-46, needing 60 votes to pass.

Toomey, who picked up a mild “C” rating from the NRA in his run for re-election in 2016, saw his campaign war chest bolstered with support from gun control backer Michael Bloomberg in the form of $5.9 million spent through the former New York Mayor’s Independence USA PAC.

The prospect of resurrecting Manchin-Toomey has been alluded to by its sponsors at different times in the past several years, typically after a mass shooting that crowded the national news cycle. A similar all-Democrat effort put forth by Connecticut’s Chris Murphy in 2016 failed 44-56, though it has been reintroduced this session.