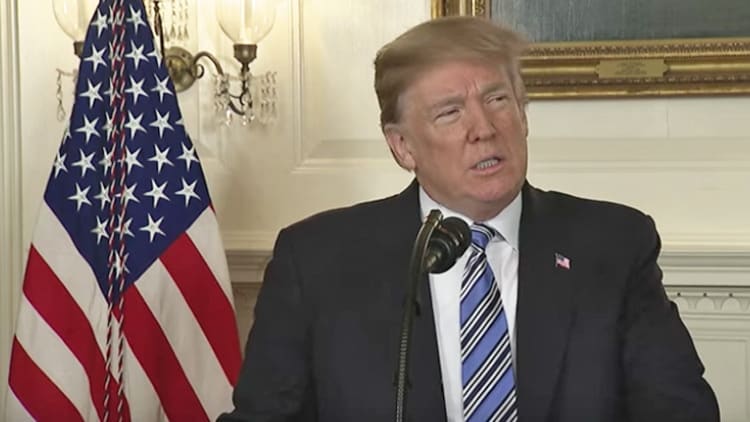 President Trump delivering his speech on the school shooting in Parkland, Florida, on Thursday, Feb. 15, 2018. (Photo: The White House)

In the wake of the Florida shooting, White House spokesmen told reporters Monday that President Trump is open to a bipartisan background check bill pending in the Senate.

According to officials, Trump spoke to Sen. John Cornyn, a ranking Republican from Texas, on Friday about the Fix NICS Act he filed with Democratic Sen. Chris Murphy, of Connecticut, to improve state and federal compliance with the National Instant Criminal Background Check System.

“While discussions are ongoing and revisions are being considered, the president is supportive of efforts to improve the federal background check system,” the White House said in a statement to reporters on Monday.

The Fix NICS Act, filed after a mass shooting at a Texas church in November, was designed to penalize government agencies that fail to report criminal records of prohibited buyers to NICS. Lawmakers filed the measure after learning the Texas gunman had been convicted of domestic violence charges while serving in the U.S. Air Force, but the military failed to report it. The error spurred Senate hearings as well as internal investigations by the Defense and Justice Departments.

Although the measure gained support from a bipartisan group of lawmakers and a leading gun rights group, the National Shooting Sports Foundation, the White House did not throw weight behind it. Yet, the White House did support a measure that combined directives of Fix NICS with the national reciprocity bill, which would force states to honor one another’s concealed carry permits. Congress advanced the latter measure in December.

Trump’s openness to the bipartisan background check bill is also a slight change in tone from last week’s statements responding to the deadly school shooting in Parkland, Florida. In a prepared statement Thursday, Trump characterized the incident as a problem with school security and mental health. In contrast, a public outcry ensued in which advocates blamed the availability of guns, especially AR rifles.

The president spent the weekend in Florida meeting with shooting victims and reportedly surveying guests at his Mar-a-Lago resort about policy options he should pursue on gun control. Students, including survivors from the Parkland high school, this past weekend held rallies and protests calling for lawmakers to take action and pass gun control measures. The president reportedly took notice.

Trump ran his 2016 campaign as the pro-gun candidate and gained the support of organizations like the National Rifle Association. The NRA, which declared itself  Trump’s strongest ally, was one of the only mainstream political organizations to support his candidacy. The gun lobby spent more than $30 million supporting his campaign.

Through its online talkshows, the NRA has dismissed calls for gun control and instead focused on calling out failures by law enforcement to prevent the shooter from taking action. The Federal Bureau of Investigation said it failed to investigate the shooter despite receiving a tip about his erratic and threatening behavior.

The Florida gunman, 19-year-old Nikolas Cruz, opened fire on Feb. 14 at Marjory Stoneman Doughlas High School. He killed 17 people and injured 15 others. Cruz reportedly bought his rifle a year before the shooting despite a number of flags. However, none of which would have labeled him a prohibited buyer.

The teen’s mother reportedly told health officials that he suffered from depression, attention deficit hyperactive disorder and autism, according to reports. And, after a break up with his girlfriend in 2016, he began cutting his arms and posting pictures of it to social media, and writing hate symbols on his backpack. Cruz also was expelled from school last year.