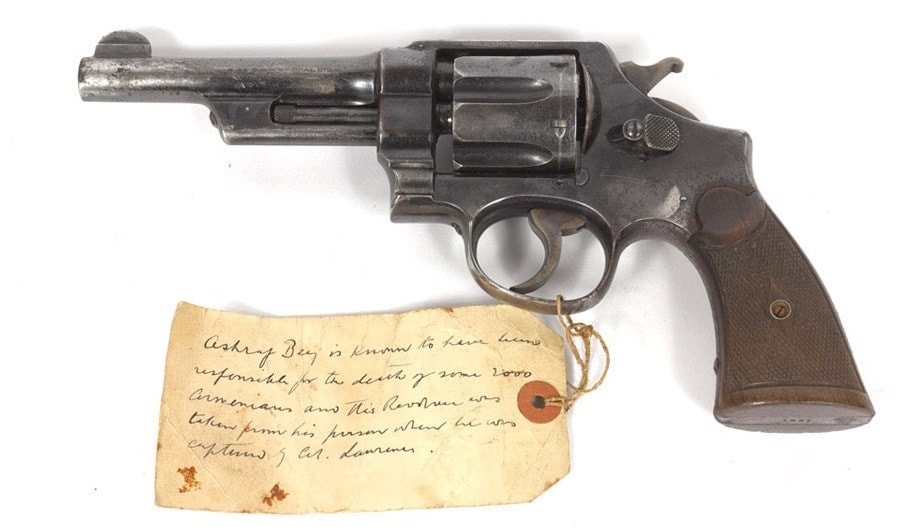 This S&W once was owned by Turkish officer Ashraf Bey, then picked up by Lawrence of Arabia after a one-sided discussion and later found its way to the UK’s National Army Museum (Photo: NAM)

The UK’s National Army Museum recently announced they have received a historic revolver tied to an iconic British adventurer from World War I.

Born Thomas Edward Lawrence, the famous British Army captain was best known as “Lawrence of Arabia” due to his work in the Ottoman-controlled Middle East during the war as a point man between the British and a number of Arab tribes in a revolt against Constantinople.

The revolver, which looks to be a Smith & Wesson 1st Model Hand Ejector in .44 — the company’s first N-frame, is engraved with the name of Ashraf Bey.

Who? You may ask. This guy: 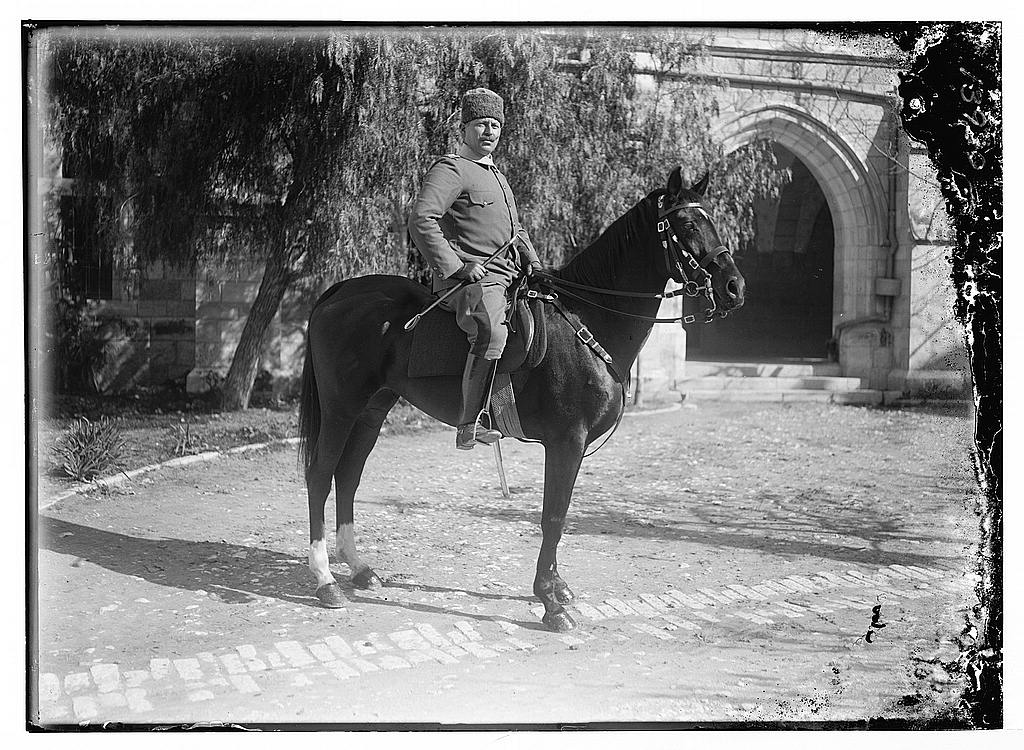 Ashraf Bey, in American Colony courtyard in Jerusalem, then part of the Ottoman Empire, 1917. (Photo: Library of Congress)

Bey was an Ottoman bigwig that the National Army Museum notes was involved in the Armenian genocide. So historically, not a swell guy. Anyway, as the story goes, Bey was captured by the Lawrence-allied Bedouin forces while escorting a camel convoy that was carrying between £15,000 and £20,000 in gold (sources vary, hey, haven’t you seen Three Kings?).

Lawrence, a gifted linguist among other valuable life skills, likely interrogated Bey and wound up with the pistol which he later passed on to another officer whose family gave it to the museum. It, together with the holster, are on public display now. 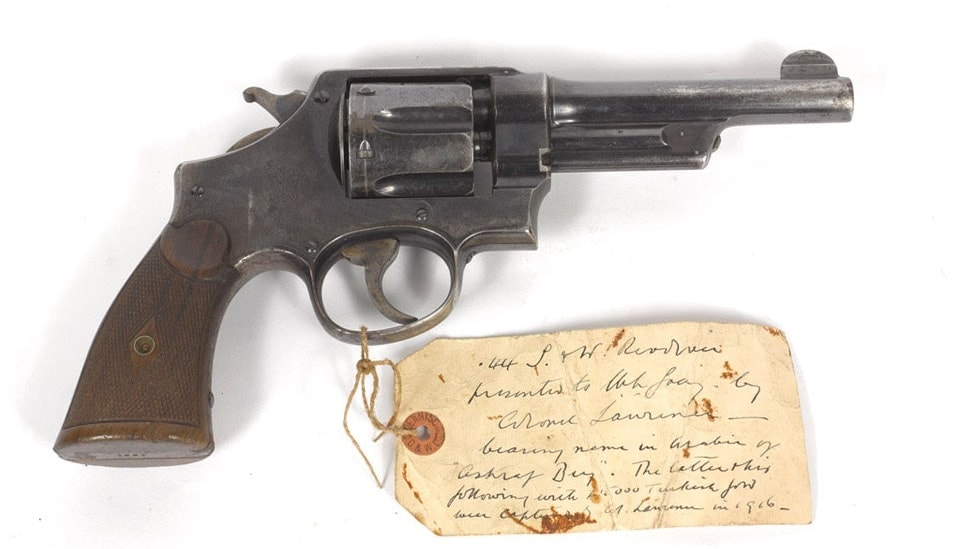 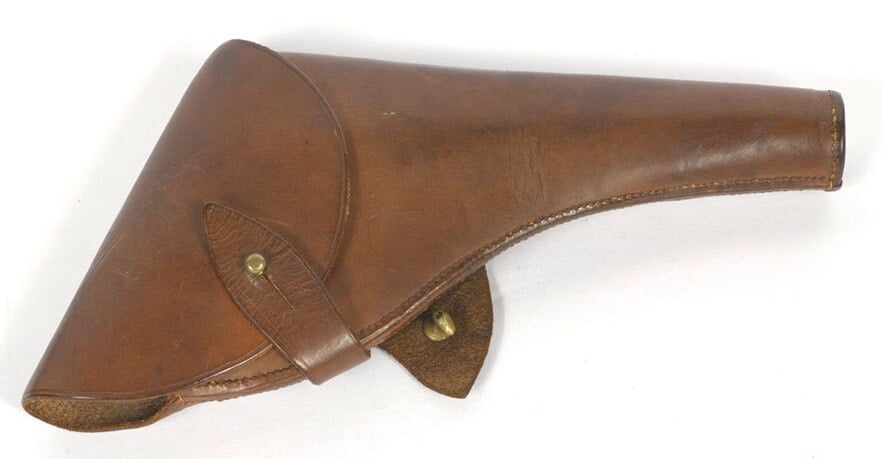 Lawrence, reportedly fond of carrying an M1911 Colt .45 ACP on his person and a Lewis gun in his baggage for those special moments, made it a habit of re-gifting guns that he picked up in the desert.

The Imperial War Museum has a Short-Magazine Lee-Enfield rifle in .303 British in their collection that spent some time with the sandy traveler.

Looks plain enough, but wait till you get close (Photo: IWM)

It was issued at first to a member of the Essex Regiment at Gallipoli but was left behind somehow in the evacuation and subsequently captured in very good condition by the Turks. Sent to Constantinople as a trophy, the Ottoman government had it engraved near the lock in gold “Booty captured in the fighting at Chanak Kale.” The Enver Pasha then presented it to Emir Faisal (an Arab ruler, then an Ottoman subject) as a gift in 1916. It was then inscribed near the bayonet mount “Presented by Enver Pasha to Sherif Feisal.” 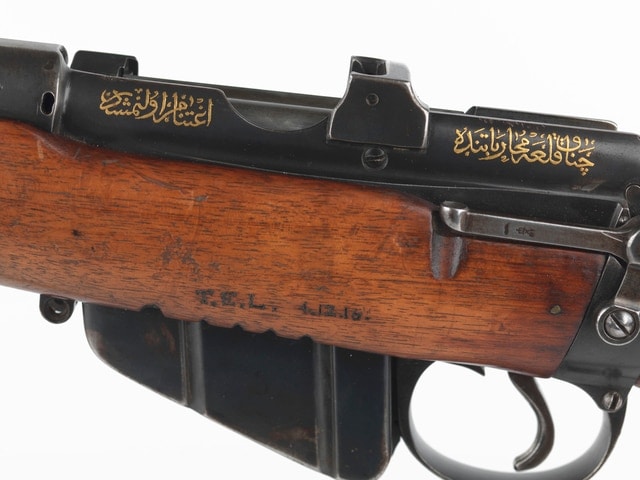 Without any captured .303 ammo to feed it, Feisal sent the rifle to Mecca for storage with the rest of his family’s trophies. Feisal later returned the good English-made Enfield to Lawrence and the blonde-haired rabble-rouser carved his initials and the date in the stock and carried the rifle until October 1918 when Damascus was captured.

Notice the knocks above the magazine well? The gun has five notches carved into the stock near the magazine, with one, in particular, marking the death of a Turkish officer taken with the gun by Lawrence. After the war, the rifle was presented by then-Colonel Lawrence to King George V, passing to the Imperial War Museum upon the regent’s death.

The Faisal went on after the war to become King of Syria and later Iraq and was played in David Lean’s epic Lawrence of Arabia by Alec Guinness, while Lawrence was portrayed by Peter O’Toole. 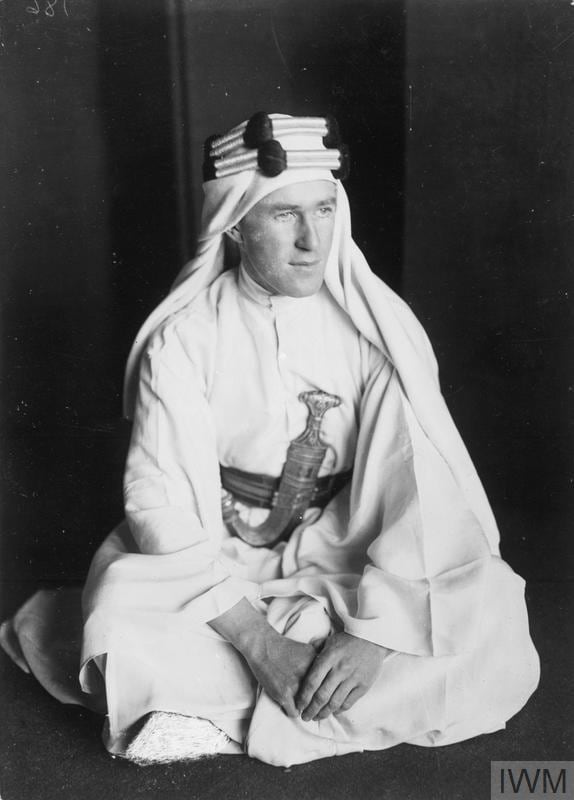