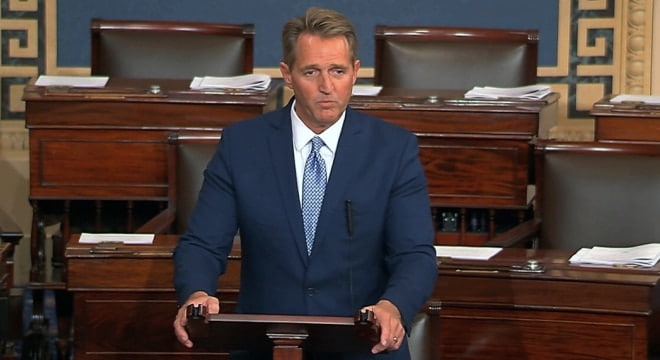 Arizona Republican Jeff Flake is among those in Congress that plans to introduce legislation to push the minimum purchase age for a rifle to 21. (Photo: CSPAN)

Arizona’s U.S. Sen. Jeff Flake said Wednesday he is working with Dianne Feinstein on a measure to increase the threshold age for rifle purchases from 18 to 21.

Flake, a Republican retiring from Congress after his current term, said he was joining with the California Democrat to craft a bipartisan bill to raise the age for “non-military buyers” to purchase rifles to 21, the same age currently required for handguns.

“A kid too young [to] buy a handgun should be too young to buy an #AR15,” tweeted Flake, who in the past has received both high ratings from and the endorsement of national gun rights groups.

The announcement comes as part of the larger gun politics fireworks show surrounding a mass shooting last week in Parkland, Florida in which a 19-year old with a legally purchased AR-15 killed 17 students and faculty at Marjory Stoneman Douglas Highs School. While individuals can buy longarms such as shotguns and rifles at age 18, explosives, handguns, and NFA items such as suppressors are restricted to those aged 21 years and older.

According to recent census figures, an effort to bar rifle sales to those between the ages of 18 and 21 could affect as many as 13 million individuals. According to the ATF’s Annual Firearms Manufacturing and Exportation Report, in 2016, the most recent on record, of the 11.5 million firearms produced by American gun manufacturers, 4.2 million were rifles.

While a measure has not been filed yet, it could receive support from some in the GOP besides Flake. At a CNN town hall event Wednesday featuring survivors of the Parkland shooting, U.S. Sen. Marco Rubio, R-Fla., told the crowd, “I absolutely believe that in this country, if you are 18 years of age, you should not be able to buy a rifle and I will support a law that takes that right away.”

President Trump has also reportedly signaled an openness to raise the minimum age for rifle sales.